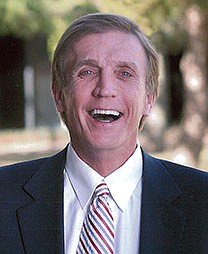 Hamilton: Insurance would have saved Aaron Rodgers from 'Mayhem'

Hamilton: Meghan has information that may lead to Hillary’s arrest

Drake University hosted the debate between the dwindling numbers of Democratic candidates Tuesday in Iowa.

Hamilton: Elvis was the first to descend to heaven

Graceland in Memphis had a vigil Wednesday to mark the eighty-fifth anniversary of the birth of Elvis Presley.

God Bless America, and how’s everybody? The Golden Globe Awards were highlighted by Ricky Gervais’ blistering and hilarious anti-PC opening monologue. It didn’t go unnoticed in Washington. Ricky Gervais could be impeached and removed from show business for attacking Hollywood without first obtaining Congressional approval.

Hamilton: Another funny look back at 2019

Joe Scarborough ripped the Democratic candidates for their debate performances Friday for wandering so far left they are being mocked. There’s a new debates drinking game that’s sweeping the nation.

Hamilton: The Year in Jokes from 2019

God Bless America, and how’s everybody? Here’s a taste of of our annual Year in Jokes. The New England Patriots owner Bob Kraft was charged with hiring prostitutes at an Asian massage parlor in Florida. During his team’s post-Super Bowl scandal two years ago when they were accused of deflating footballs, Kraft stated that nobody played with his balls. Well, now there’s video.

Quentin Tarantino’s “Once Upon a Time in Hollywood” was nominated for a Golden Globe for Best Comedy Motion Picture, which was set in the world-changing year of 1969.

The Titanic II is set to sail from England to New York next April.

Hamilton: Image is everything for Californians, even comedians

Southern California mountains were under a frost alert Monday as a cold front from Alaska roared into L.A.