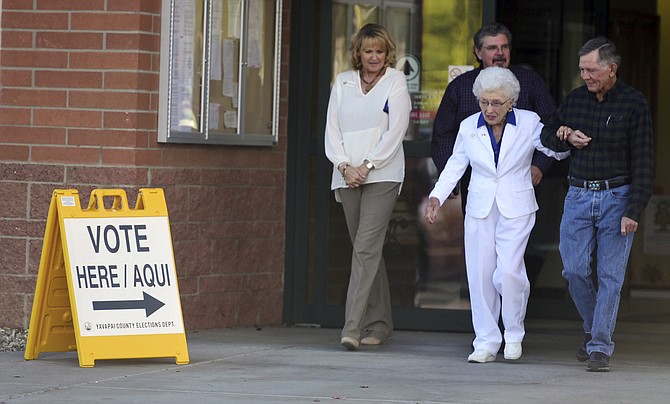 Jerry Emmett, who was born before women won the right to vote in the U.S., leaves the Yavapai County Administration Building with her son, Jim, Yavapai County Recorder Leslie Hoffman and Jack Fields assistant Yavapai County administrator after casting her early ballot in the 2016 presidential election Tuesday, Nov. 1, 2016, in Prescott, Arizona. Hoffman said Friday, July 1, 2022, that she is resigning as county recorder due to all the "nastiness" she has received after more than a year and a half of threats and heated criticism from Republican backers of former President Donald Trump. (Les Stukenberg/Courier file)

The elected county recorder and the elections director in Yavapai County are resigning after more than a year and a half of threats and heated criticism from backers of former President Donald Trump who accept his claim that he lost the 2020 election because of fraud.