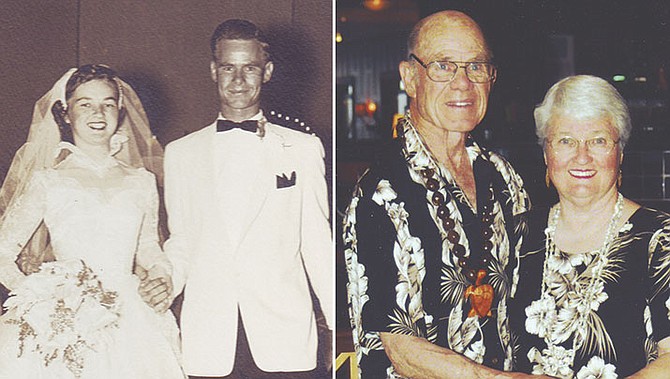 LouAne Larsen and James Robert Habecker are celebrating 66 years of marriage. LouAne, the daughter of Denmark born father Louis Andrew Larsen and mother Verna Ethel Palmer, was born in Paso Robles, California, on April 16, 1935. She graduated from West Phoenix High School in 1953. James, the son of Noah Habecker and Mary Catherine Pearce, was born March 16, 1929, in Phoenix, Arizona. He graduated from Phoenix Tech School in 1949. They met at the old Vista Theatre in Phoenix and were married on April 22, 1955, in the Bethel Methodist Church in Phoenix. Later, on Feb. 13, 1965, they were sealed as a family for time and all eternity in the Mesa Temple of the Church of Jesus Christ of Latter-day Saints. The couple has lived in Chino Valley since August 1988. They have six children, Barbara, Donald, Linda, Edward, Samuel and George, as well as many grandchildren and great-grandchildren. (Courtesy)

May 1, 2021
Tweets by @TheDailyCourier
Event Calendar