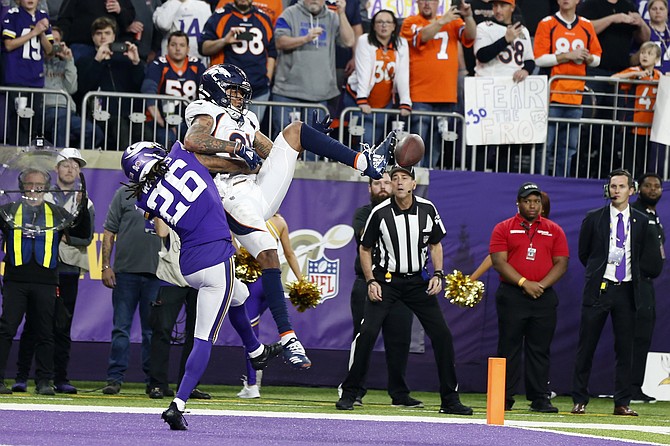 Minnesota Vikings cornerback Trae Waynes (26) breaks up a pass intended for Denver Broncos wide receiver Tim Patrick (81) in the end zone during the second half of an NFL football game, Sunday, Nov. 17, 2019, in Minneapolis. The Vikings won 27-23. (AP Photo/Bruce Kluckhohn)

MINNEAPOLIS (AP) — The Minnesota Vikings erased a 20-0 halftime deficit with touchdowns on each of their four drives in the second half, fending off the Denver Broncos by forcing three straight incomplete passes in the end zone over the final 10 seconds to preserve a 27-23 victory on Sunday. This was the first time in five years — a span of 100 games including the playoffs — that an NFL team won after trailing by 20 or more points after two quarters.