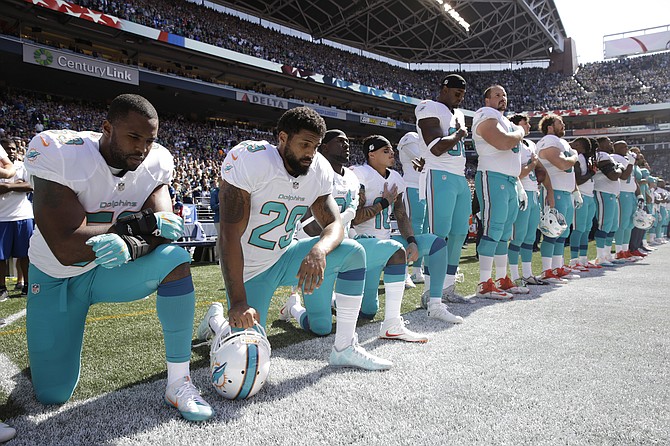 In this Sept. 11, 2017 file photo, from left, Miami Dolphins' Jelani Jenkins, Arian Foster, Michael Thomas, and Kenny Stills, kneel during the singing of the national anthem before an NFL football game against the Seattle Seahawks in Seattle. Miami Dolphins players who protest on the field during the national anthem this season could be suspended for up to four games under a new team policy issued to players this week. The policy obtained by The Associated Press on Thursday, July 19, 2018 classifies anthem protests as conduct detrimental to the club, punishable by suspension without pay, a fine or both. (Stephen Brashear/AP, File)

Miami Dolphins owner Stephen Ross said he hadn't decided whether to actually discipline players who protest during the national anthem when he formally told the team that the demonstrations could be punishable.