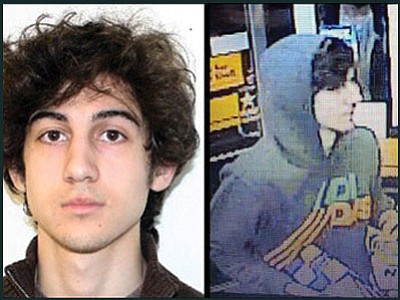 This combination of photos provided on Friday, April 19, 2013 by the Federal Bureau of Investigation, left, and the Boston Regional Intelligence Center, right, shows a suspect that officials have identified as Dzhokhar Tsarnaev, being sought by police in connection with Monday's Boston Marathon bombings. (AP Photo/FBI, BRIC)

Manhunt in Boston after bombing suspect is killed

WATERTOWN, Mass. (AP) - The two suspects in the Boston Marathon bombing killed an MIT police officer and hurled explosives at police in a car chase and gun battle overnight that left one of them dead and his brother on the loose, authorities said Friday as thousands of officers swarmed the streets in a manhunt that all but paralyzed the Boston area.