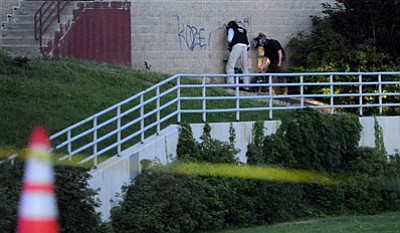 The Denver Post, Aaron Ontiveroz/The Associated Press
Police investigate outside a movie theater after a shooting Friday, July 20, 2012 in Aurora, Colo. A gunman wearing a gas mask set off an unknown gas and fired into the crowded movie theater killing 12 people and injuring at least 50 others, authorities said.

A gunman wearing a gas mask and black SWAT gear hurled a gas canister inside a crowded movie theater during a midnight showing of the new Batman movie Friday and then opened fire, killing 12 people and wounding nearly 60 others in an attack so bizarre that some moviegoers at first thought they were watching Hollywood special effects.As smoke from the canister spread, audience members watching "The Dark Knight Rises" at the suburban Denver theater saw the silhouette of a person materialize near the screen, point a gun at the crowd and begin shooting, apparently without a word.