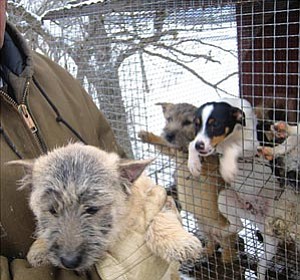 Courtesy photo
At a puppy mill in Wisconsin, the "breeder" wears heavy coat and gloves against the January chill, while pups huddle on a wire mesh floor. "The sight of puppies in cages, outdoors, may upset some people, but it's not against the law," a breeder told reporter Mike Jacobs. "They were outside for a million years. It's only the last 200 that people have been putting 'em in the house."

Buyer beware: Make sure you're not supporting puppy mills

An edition of "Oprah" last year focused national attention on the "puppy mill." Puppy mills provide an unending supply of often purebred puppies to a public with an insatiable appetite for them, an appetite that has created a situation ripe for abuse.