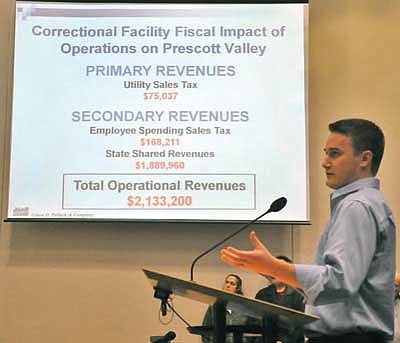 Matt Hinshaw/The Daily CourierDanny Court an Economic Analyst with Elliot D. Pollack and Co. presents his companies findings to the Prescott Valley City Council on the economic impact a private prison would have on the town Thursday night during a Town Council meeting in Prescott Valley.

The Town Council majority has taken a stance to oppose a private prison in the community without taking a formal vote on the matter.Vice Mayor Lora Lee Nye and council members Mike Flannery and Fran Schumacher followed Mayor Harvey Skoog's lead Thursday evening by adding their voices in opposition. They cited widespread opposition from the public as well as the stigma of a prison locating in the community, even though they realized it would create badly needed jobs.