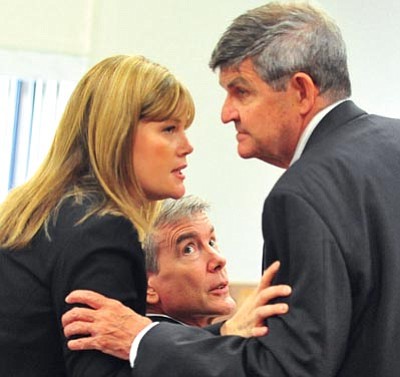 Les Stukenberg/The Daily Courier
Murder suspect Steven DeMocker looks on as lawyers Anna Chapman and Larry Hammond confer during a hearing at the Yavapai County Courthouse on Nov. 5 in Prescott.

TOP STORIES OF 2010 - No. 1: After months of ups and downs, DeMocker case fizzles into mistrial

A murder trial that riveted the Prescott area in 2010 but ended as a mistrial in November may return to court next year.Steven DeMocker, 56, a Prescott stockbroker, was charged with murder and burglary in the death of his former wife, Carol Kennedy. Later, prosecutors brought fraud charges against DeMocker after it came to light he allegedly had his teenage daughter send an anonymous e-mail to his defense lawyer that claimed a drug gang carried out the killing.