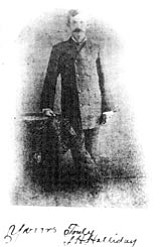 Courtesy/Sharlot Hall Museum
Historians believe this 1879 photo of Doc Holliday in Prescott is genuine because Holliday signed it.

Some of the most famous Wild West characters of all time - the lawmen involved in the shootout near Tombstone's OK Corral - once roamed Prescott's Whiskey Row.