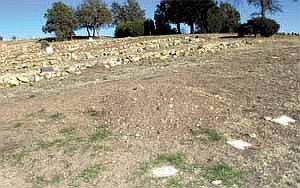 Courier/Nathaniel Kastelic
This is the spot, above, in the Pioneers¹ Home Cemetery where the former Lincoln County, N.M., sheriff and others dug up and took bones that they hope belong to John Miller, who claimed to be Billy the Kid. The only authenticated photo of Billy the Kid is at left.

Officials could face charges for digging up alleged Billy the Kid

PRESCOTT ­ Did New Mexico deputies violate the law by digging up the remains of a Prescott man who claimed to be Billy the Kid?

By By JOANNA DODDER The Daily Courier April 12, 2006
Tweets by @TheDailyCourier
Event Calendar