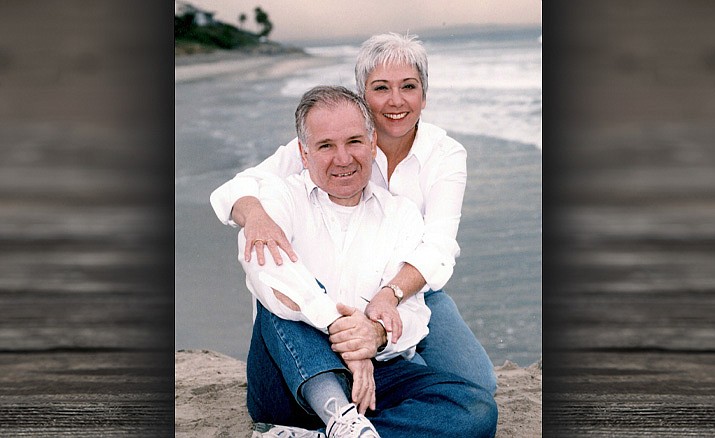 Bernadine “Bebe” Pullaro (Wright), 69, passed away suddenly with her husband James “Jim” Pullaro on January 1, 2023. Bebe was born on January 5, 1953, in Detroit, MI, the youngest daughter of Tony and Amelia Buono. Bebe graduated from Rochester Adams High School in Rochester Hills, Michigan in 1971. In 1974 she moved to Los Angeles and earned a bachelor’s degree from the University of Redlands, California, and a CA Real Estate Broker’s License. Bebe worked for Kaiser Permanente, one of the largest not-for-profit health plans in the United States. She was eventually promoted to Property Acquisition Director for Kaiser Permanente’s Southern California Region, acquiring many of Kaiser Permanente’s most important properties and helping to fuel its successful expansion. After an early retirement from Kaiser Permanente, she moved to Prescott, AZ and started a commercial brokerage business for Prudential Real Estate and NAI Horizon Commercial Real Estate. Bebe then joined Arizona Commercial in Prescott, Arizona, and became a partner of that company with her husband Jim, helping to shape one of the leading commercial real estate brokerage and management companies in Central Arizona. While Bebe cemented her reputation as a highly successful commercial real estate professional in Arizona and California, she will be remembered most for her great love for her husband Jim, her family, baking, knitting, dogs, and winning at card games, her generosity to those in need, and her smile while relaxing in Cabo San Lucas, Mexico, where she hosted friends and family members at her vacation property. Bebe is survived by her sisters, Paula Consiglio of Clinton Twp., MI, and Adele Buono of Vista, CA, and brother Anthony Buono of San Diego, CA.

James W. Pullaro, 79, passed away suddenly with his wife Bernadine “Bebe” in a fatal car accident en route to San Diego on New Year’s Day 2023. Jim was born in Chicago on July 9th, 1943 to Florence and Vincent Pullaro. He was one of three children; Sandra was the eldest and Dennis was the youngest sibling. Jim graduated from Fenger Academy High School where he was involved in football, as #40. All three children worked at their parents’ grocery store. Jim was the mischievous and curious one, always happy, always joking around, and always making pranks. After graduating from high school, he joined the Army and was stationed in Verdun, France. While there, he met Nelly Hourcade. They would later marry in September, 1968 in Scottsdale, AZ. After his service in the military, Jim moved to Arizona in 1965 and attended ASU where he earned a bachelor’s degree in Marketing. After he graduated from ASU, Jim saw a need for education in the real estate market so in 1969 he founded Arizona School of Real Estate (ASRE). July of that same year he and Nelly gave birth to their first child, Monique. Two years later, in 1971, their son, James Paul was born. While Jim retained his ownership in ASRE, he moved on to work for Rusty Lyon at Westcor where he was hired as its lead leasing agent. Always looking for a new challenge, Jim was a visionary, and went on to start and help enhance several other businesses including James Pullaro Realty, Dependent Care Network, Sunrise Preschools, Karigan Estates, and Arizona Commercial Funding, to name a few. By way of example, through Karigan, Jim made history by helping the Navajo Housing Authority arrange and help tribal members obtain loans and own property, the first in the U.S. to do so. As progressive as he was in business, Jim was a greater father. Time with his family was critical to him. He loved the outdoors and spending time with Monique and James Paul riding on their dirt bikes, camping, four-wheeling and snow skiing at their cabin in Pine Top. In 2000, Jim became a grandfather to Sebastien, “little guy” as Jim called him. They spent countless hours together sharing camping trips with the Boy Scouts, wood-working in “gramp’s” work shop, and playing family card games of rummy since Sebastien was 5 years old. In 2004, Jim and Bebe married and became life-long, inseparable partners, both in love and in business as they shared the same interests and hobbies. Jim loved sweets and Bebe loved to bake them. Their combined interests in real estate merged their business acumen into Arizona Commercial Funding. They relished spending time with their combined Italian-rooted families. Jim retired in 2012 to spend more time and to travel with his family, and to walk in the woods with his three very loved and spoiled dogs and to enjoy his passion for politics, even starting a small coalition to attempt to diminish the influence of money in politics, which he saw as a threat to the common voice of the electorate. Jim spent many hours in his growing workshop (he was a voracious buyer of woodworking tools), making a tree house for his grandson, planters for his children and personalized cutting boards engraved with his name. Jim will be adoringly remembered for his love and devotion to his beloved wife, Bebe, and deeply missed by his children, Monique & James Paul, his grandson Sebastien and by all his nieces and nephews he shared with Bebe. He loved family, he loved the outdoors with his dogs, he loved being in his work shop, and he loved his card games. But most of all he just wanted to share his time with his family, just being with his family brought him pure joy. A memorial service will be held at Brophy Chapel, 4701 N. Central Ave., Phoenix on Saturday, January 28th at 1pm. Donations can be made to Disabled American Veterans (dav.org), Breast Cancer Institute (breastcancerinstitute.org) or Mini Mighty Mutts Rescue (minimightymutts.com).