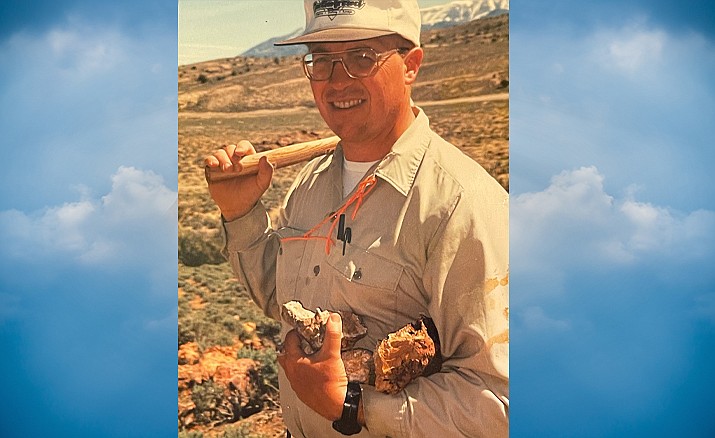 David Cooper Knight died at home surrounded by his family September 18, 2022 in Elko, Nevada after a 16-year battle with cancer.

He was born October 24, 1954 in Prescott, Arizona to Robert L. Knight and Madelon D. Knight.

He worked as an exploration geologist which took him on many memorable adventures beginning with Texas Gulf and ending with Newmont Exploration Ltd.

In 1990 he married Debra Jane Metteer in Prescott. Five years and two children later, David and Debra started Carlin Trend Mining Supplies and Services in Elko. The company sells geological, drafting and surveying supplies. It also provides claim staking, soil sampling, and temporary job service. They expanded the business to a larger building in downtown Elko. That’s when David came up with the idea to create Rolling Rock Gallery, a unique gift store. They opened a sister company, Copper Triangle/Rolling Rock Gallery, in downtown Superior, Arizona. They also bought a rock quarry outside of Prescott, Arizona naming it Big Bug Sand and Gravel.

David had a passion and was successful in finding gold. He has numerous gold and silver properties in Nevada, Arizona and Colorado.

While his devotion to geology and his businesses had him working up until his final day, he was very active in the Prescott and Elko communities. He made time to walk his two kids to and from school every day. After school he was a Cub Scout leader and soccer coach. His weekends were filled with traveling to soccer tournaments, refereeing local games, and teaching his kids how to stake mining claims all over the Nevada desert.

Dave also loved cycling and was known for walking the family’s three dogs around the neighborhood. He leaves behind his wife Debra, son Samuel, daughter-in-law Nina, grandson Noah and daughter Hannah.

In honor of David and his love for geology, in lieu of flowers, his family is requesting donations be made to the David Knight Memorial GSN Elko Chapter Scholarship, PO Box 2591 Elko, Nevada 89803. Or to https://geological-society-of-nevada-copy.square.site/