For Your Safety: Parents, grandparents ... beware! The cartels want you! 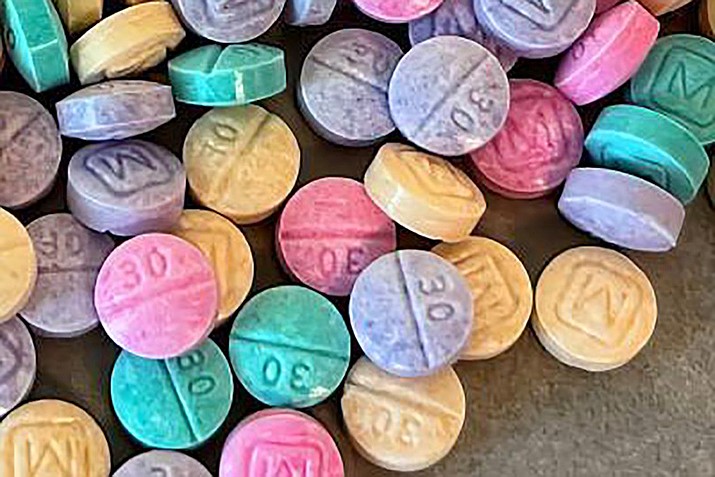 “Rainbow fentanyl” is now coming to Arizona in various colors that look like candy. Just two milligrams of fentanyl is considered a lethal dose, a news release stated. (PVPD/Courtesy)

We are less than two weeks away from Halloween and our children and grandchildren acquiring bags full of candy and goodies from area homes and parties! It is a night filled with fun and spooky fantasy dreams. I used to wait with great anticipation for the excitement of running through the darkness and being given handfuls of free candy. What could be better?

Sadly, in this somewhat broken society in which we now live we all need to recognize a current and present danger that can quickly turn a day of fun into one of grief — that being the heightened presence of the killer substance fentanyl in our state and nation.

Experts say that the number of fentanyl tablets that entered the country last year, many through Arizona, have been enough to kill every man, woman and child in the United States. The danger from this deadly substance to our children and grandchildren is greater now, than ever before, over this Halloween season. The open border policy has been a major factor in the acceleration of this crisis, illegal importation of fentanyl is now at an all-time high.

Introducing individuals to fentanyl, which is highly addicting, is a major focus of cartel strategy. This is accomplished easily through manufacturing “look alike” candy containing the substance. The drug has been made to resemble such familiar brands of candy as Nerds and Skittles, fentanyl powder has been found formed into what appears to be “sidewalk chalk,” the resulting powder given off when using the chalk can be inhaled and cause death.

Mimic pills have long been a concern as well. Pharmaceutical pills that appear normal and recognizable that are, in fact, laced with the substance. Fentanyl molecules block brain receptors that signal the lungs to breathe, causing asphyxiation.

The highly dedicated people at Prescott Valley-based MatForce suggest that you carefully check all candy and unsealed items acquired on Halloween before eating. Not sure of something, throw it away. Don’t take the chance!

A yummy looking candy may be “the Devil in disguise.” Council children not to eat items while out trick or treating! Bring all items home for parental OK. “No east on the street.” One laced candy can be a killer.

The fentanyl crisis far exceeds any military threat that our country now faces. Fentanyl is a foreign strategy designed to destroy us from the “inside.”

K.H. Kraft has over 40 years of affiliations with intelligence and police organizations. Sources for these articles are decades of personal experience and numerous official manuals.