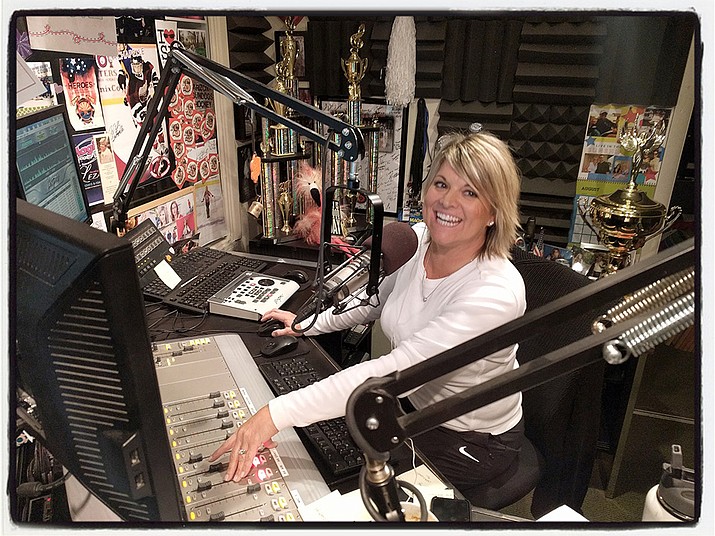 Leza Lachapelle Dandos on the job with ‘Leza Live and Local.’ (Barry Barbe/Courtesy)

Across the Street Columnist

For many, the first familiar voice you hear in the morning is your spouse, your kids or a coworker.

For a large segment of Prescott, the other familiar voice offering words of encouragement and insight into the happenings in Prescott, Is Leza Lachapelle Dandos, of “Leza Live and Local” on Magic 99.1. “Ironically, I’m not a morning person. I have to set three alarms, get my coffee and go through my morning routine before I hit the airwaves.” She says.

For the last 11 years, Leza has been waking up the Cinco cities with Daily Trivia, interviews with community members and local sports figures, as well as info on local events and happenings.

Having moved to Scottsdale at the age of 16, Leza was active in high school sports, student body vice president, water girl for the football team, and entered ASU with the dream of being a portscaster at the national level. The advice from a professor who

informed her that “Women don’t report sports...” led to a change of focus, followed by meeting Prescott resident, Scott Dandos at ASU, resulting in marriage and a change in locale and career goals.

“When I arrived in Prescott, there wasn’t a lot going on for a broadcasting major.” “I ended up taking a position as production manager at KUSK, the only local TV station.

“I was in the back doing production when there was one live show on air at the time, which was hosted by Tonya Mock. Later, when I was asked by the station manager what I wanted to do, I was offered the anchor position for the “Take Five” newscast.”

“At that time, we were getting press releases via snail mail. We didn’t have internet, and so whoever sent something in, there was a good chance you would get a few minutes of promo on the five-minute news.”

During a period where the industry was still working reel-to-reel, Leza learned the gig from the ground up. Over the past 30 years, she continues to be a live, positive presence in an industry that is seeing an increase in streaming services from well outside the area.

The challenge of hosting a morning show goes beyond getting up on time. “I feel a responsibility to remain positive and neutral on local and national issues. But sometimes, it’s hard. My job is to entertain and inform. I do have to bite my tongue occasionally, but I also have the freedom to speak my mind. — And I haven’t got in

With two grown daughters, Leza started her career in radio as a part-time afternoon news reporter when her youngest entered kindergarten that quickly turned into the morning radio show host job that Leza still loves today.

Outside the studio, Leza can be found hitting the greens as much as possible. “I took up golf, because I was tired of being left at home while my husband, my father and my brothers would hit the links.”

Originally from Ogden Utah, a love of skiing continues, as well as mountain biking, paddle boarding and just about anything that gets her outside fills her off time.

Currently station manager, Leza is a one-woman show in the booth. “I do everything, I book the guests, pick and play the music, I answer the calls, I do the promos and record the sponsorships.”

Some of the more challenging periods involved local events that had an immediate effect on the community.

“One of the somber moments was the Whiskey Row fire.” “I headed down to the station and went live to get the information out.”

“I listened, and cried on air with folks that called in after the loss of the Granite Mountain 19. I’m part of the community, and as such, I have the same tone and concerns the rest of the community does.”

“That was a very difficult time, but that’s what my job is all about. Prescott is a small tight community, and many times, local radio is the only source of immediate information during periods of challenge. It’s the same with local wildfires. We’re on-air offering information and connecting the community with resources.”

And being a part of the community is something that Leza takes very seriously. Leza has been hosting the Whiskey Row NYE Boot Drop for the past 10 years, and announces for sporting events at Findlay Toyota Center as well as serving as emcee for various local events.

For the premier season of Dancing for the Stars, Leza was a dancer on a hoverboard no less, which benefited The Prescott Boys and Girls Club, an organization which she also served on the board for many years. Currently, Leza serves on the Board of Advisors for the Arizona Community Foundation of Yavapai County. “Carol Chamberlin is my mentor, and it’s a pleasure to serve with an organization that gives so much back into the community.”

Speaking of Mentors, Leza is that to many young women and girls looking to enter an industry that is continuing to evolve. “My advice to anyone interested in entering the industry, is get out there and make it happen. Start a podcast, go to school, and most of all, be yourself.”

Leza Live and Local is that familiar, positive voice on the way to work, or while sipping your morning cup O’ joe. Connecting the community, by being part of it.

Barry Barbe owns the El Gato Azul and Torme restaurants in Prescott, and is the energy and insight behind the Prescott Palette. Email: [email protected]