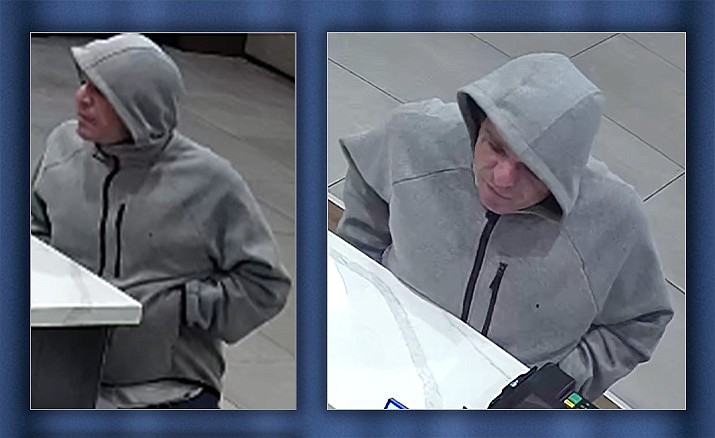 Prescott Police is seeking a possibly Hispanic man, about 5-foot-5 with tattoos on both hands and under his right eye. (Prescott Police/Courtesy)

Prescott Police is seeking the identity of a middle-aged Hispanic man who allegedly robbed the Shell gas station at 1325 W. Iron Springs Road between 2 a.m. and 3 a.m. on Tuesday, May 24, a department news release reported.

“The suspect in this case threatened to have a handgun in both robberies,” the release added. “However, no gun was reported seen.”

Based on video surveillance footage at Shell, police say the suspect appears to be Hispanic and 5-foot-5 with tattoos on both hands and under his right eye.

“At this time, the suspect in these cases is considered armed and dangerous,” the release stated. “If seen, please do not attempt to contact him. Rather, contact law enforcement immediately by calling 911.”

Anyone who may have seen something in the area of the crime in the early morning hours of Tuesday or who has knowledge of the suspect’s identity should call Detective Frascone at 928-777-1923.

You may also report information anonymously to Yavapai Silent Witness at 1-800-932-3232 or online at yavapaisw.com.