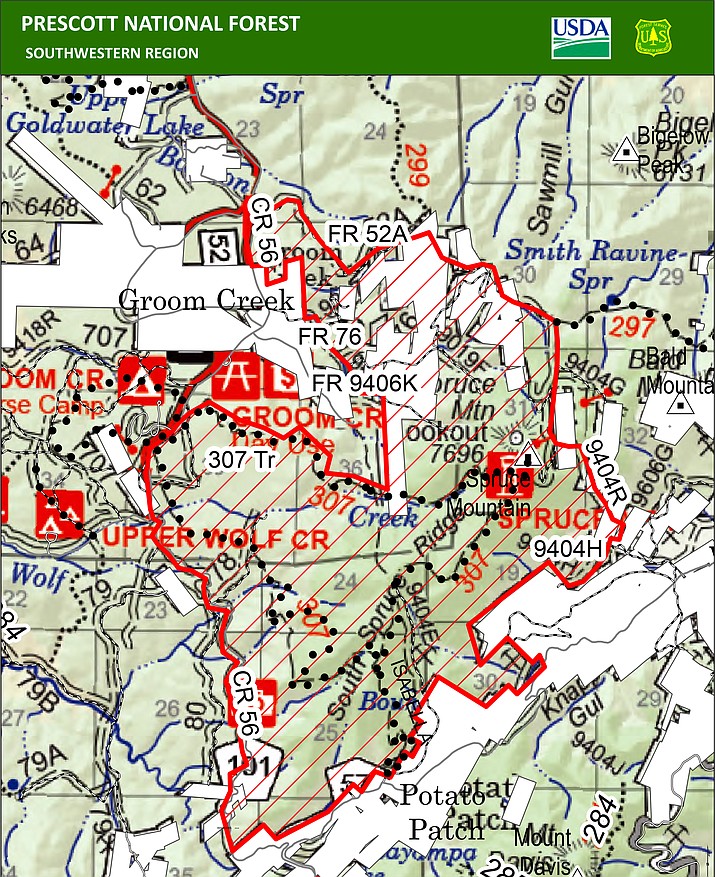 This map depicts the areas, shaded in red, that are still closed or restricted due to the Crooks Fire. (PNF/Courtesy)

Prescott National Forest officials took command of the Crooks Fire the night of May 17, a Forest Service news release reported, adding that the Central West Zone Incident Management Team led by Ryan Barela “did a fantastic job managing the fire and produced a solid plan for local resources.”

“Fire activity has been minimal, with no growth,” the release stated. “Firefighters will continue to closely monitor the fire on the ground and utilize aerial resources as needed until the fire is fully contained.”

A fire is considered fully contained when firefighters are confident that the line around the perimeter of a fire will prevent it from spreading any further, the release added.

Post-fire hazards still exist within the closure area, forest officials stated in the release, including unstable soils and the potential for falling rocks in the fire-scarred area.

Residents in the Crooks Fire area must use caution while driving on the roads, as firefighters continue to work in and around the fire, Forest Service officials say. Residents also must be wary of fire-weakened trees, ash pits and burned-stump holes.

Roads on the closure-area boundary remain closed to the public, except for County Road 56 (Senator Highway), which will stay open, the release added.

Recreation sites that remain closed to the public include:

“Campfires are restricted to developed campsites only, and smoking is only allowed inside a building or vehicle,” the release added. “Target shooting and fireworks are prohibited on both the Prescott National Forest and all State Trust land.”

For more information about the closure area, call the Bradshaw Ranger District at 928-443-8000.