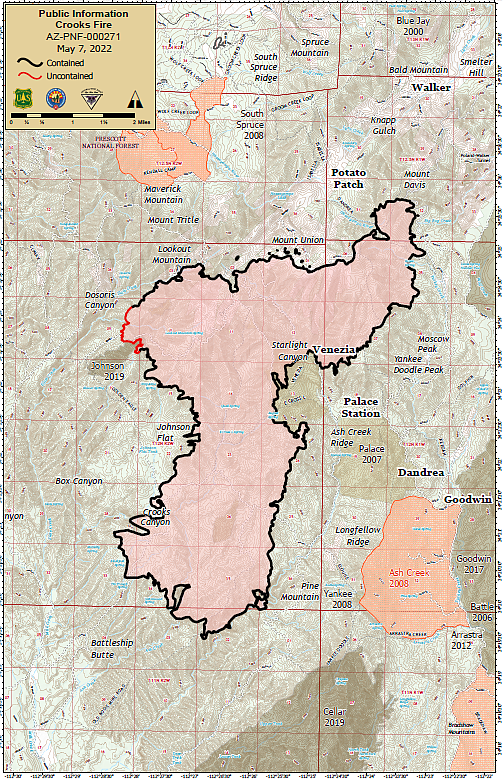 An updated containment map of the Crooks Fire as of Saturday, May 7, 2022. (Prescott National Forest/Courtesy)

Critical fire weather entering the state may challenge firefighters over the next few days as conditions align for extreme fire danger, according to a news release from the Prescott National Forest.

The National Weather Service has issued a Red Flag Warning for most of Arizona through Sunday night due to strong southwest winds and low relative humidity which can potentially intensify fire behavior and increase fire activity. Fuels remain critically dry and receptive to fire. Crews have been staged ahead of the incoming weather to provide for initial attack on new starts and to patrol the fire lines for any possible holding concerns.

Nonetheless, the Crooks Fire is still 96% contained and remained at 9,402 acres as of Saturday, May 7. It is located 11 nautical miles south of Prescott on the Bradshaw Ranger District near Mt. Union.

On Friday, aircraft flew the fire and picked up some heat within its perimeter on the northwest side. The heavy timber component on that side is contributing to increased fire behavior and heat.

Crews are inserted along that edge to suppress it and tie in remaining, uncontained line. Aircraft will continue to monitor the northwest side and provide bucket work, if needed. On the northern and eastern sides of the fire, containment lines remain stable and no interior heat is being reported.

Heavy equipment, including masticators and chippers are being used as part of the rehabilitation work within communities and along the roadways. And as a reminder, residents and visitors driving in the area need to utilize caution, the release stated.

On Saturday, a Burned Area Emergency Response (BAER) Team began their assessment of the Crooks Fire burn area. The team will be conducting evaluations of the area to identify concerns and hazards on National Forest Service (NFS) lands, including post-fire flooding, watershed conditions, and potential impacts to critical and cultural resources nearby.

Weather: Red Flag conditions Saturday through Sunday due to very dry conditions and strong southwest winds. The strongest winds on Saturday will gust 30-40 mph. Winds will be strongest on Sunday with gusts up to 50 mph.

Area Openings: All communities affected by Crooks Fire are now back in “Ready” status as of May 4, according to the Yavapai County Sheriff’s Office (YCSO). If property owners get to their residence and find damage to their homes, they can call Red Cross at 1-800-733-2767 for assistance. YCSO asks that residents be mindful that there is still fire-fighting equipment and personnel in the area and to please exercise extreme caution and slow down for everyone's safety.

Evacuations: All areas will remain in “Ready” as of May 4, according to YCSO.

A Temporary Flight Restriction (TFR) is in place: Wildfires are a NO Drone Zone. Flying recreational and media drones within a TFR is illegal and impedes fire suppression efforts. Report drones to local law enforcement. If You Fly, We Can’t.