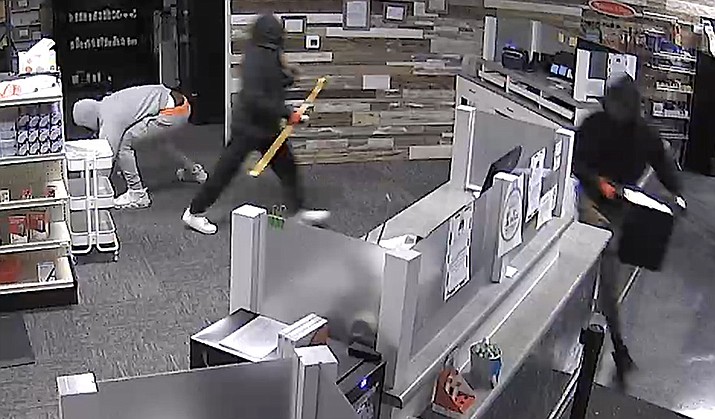 Prescott Valley Police Department (PVPD) is asking for the public’s help in locating three unknown individuals who allegedly broke into Dewey Pharmacy, 12075 E. Highway 69, and stole several thousand dollars’ worth of narcotics, as shown in this security camera footage. The two are also suspected in the June 27 burglary of the Chino Valley Pharmacy. (Courtesy/PVPD) 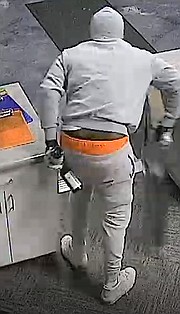 At about 4 a.m. Monday, June 27, the individuals entered the locked Dewey Pharmacy by smashing the front glass door. (Courtesy/PVPD)

At about 4 a.m. Monday, June 27, the individuals entered the locked Dewey Pharmacy by smashing the front glass door.

Chino Valley police reported in a separate news release that at about 3:29 a.m. June 27, three unknown individuals broke into the Chino Valley Pharmacy through its front door. 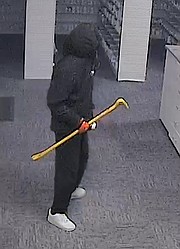 “The suspects stole thousands of dollars’ worth of narcotic drugs and exited the business at approximately 3:31 a.m.,” the release added. “All suspects wore gloves, facemasks and hooded jackets in an attempt to conceal their identities.”

Police said they think these burglaries are connected.

Yavapai Silent Witness is also available by calling 1-800-932-3232 or by logging on to yavapaisw.com.

Yavapai Silent Witness is offering as much as $600 in reward money for information leading to the arrest of these suspects.

If anyone has information on the Prescott Valley incident, call PVPD dispatch at 929-772-9267 or Yavapai Silent Witness. You may also report information online at p3tips.com.