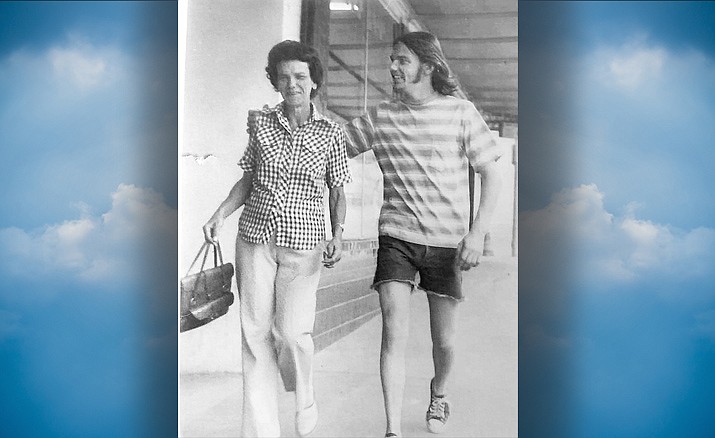 We are deeply saddened to announce the death of our father, David Alan Kellerman, who passed away in Scottsdale, Arizona on May 29, 2022, at the age of 68.

David was born on March 10, 1954, in Carrollton, Illinois, the son and ninth child of Elvira and Harold Kellerman. In 1959, his family moved to Prescott, Arizona where David spent most of his life. He considered Prescott to be his one true hometown.

At the age of 17, David graduated high school.

He was a brilliant and talented student with limitless academic opportunities but continuing traditional studies did not interest him.

An adolescent of the 1960’s counterculture, David embraced the social change he witnessed all around him.

It would not be long before he would hit the road, often traveling with his brothers Joe, Larry, and Bob from the forests of California, to the mountains of Colorado, and even as far as the deep blue seas of Costa Rica.

As a young man, David was a musician, an artist, a craftsman, and an adventurer. Everywhere he went he brought with him a smile, a kind word, his guitar, and a song. His life was inspired by so many wonderful people, but he would probably give credit to his mother, Elvira, for being the person he looked up to most in life.

Sadly, Elvira passed away at a young age from cancer, never having an opportunity to meet David’s two daughters to come, but David made it part of his life’s mission to ensure her spirit always lived on. He wrote a song, “Mama Played Piano,” memorializing some of his best memories growing up and the many lessons he learned from her that he vowed to always keep with him.

Throughout David’s life, music was the way that he spoke truth to the world and when “Davie” sang, people listened.

During the 1970s and 1980s it was common to find Davie playing in Prescott on Whiskey Row, sometimes alongside many famous artists that passed through town during that time.

But it was with Stumblin’ Buffalo, and its members Wayne and Peri Pearsall, Garry (Quij) Greer, John Hesterman, Dave Gibson and later Scottie Ellis, where his artistic heart found a home.

The band was pure magic, the music was palpable, and the town of Prescott truly came alive with excitement every time they had the chance to hear them play.

By the age of 24, David met the first true love of his life, Cindy Bowman.

In fact, the very first time they met he walked up to her and told her he would marry her one day.

She shrugged him off, but four years later, he did just that.

Cindy and David were together for 15 years, sharing a daughter, Jessica Kellerman, before parting ways.

David met and married the second love of his life, Michelle Bailiff, not long thereafter. While their marriage was short, it brought his second daughter, Shelby Kellerman, to this world.

Often times, David would say he would have never wanted the heartbreak from losing his first love, but had it not been for that, he would not have Shelby and that made it all worthwhile.

A friendship with both of his former wives endured throughout his life. David always remembered birthdays and special occasions, spoke kindly and fondly of the memories they shared and even often took road trips and hikes with Michelle and her dog “Boo” more than 20 years after their divorce.

There was no one David spoke more highly of than his daughters, Jessica and Shelby, and ultimately his grandson, Mason.

The love he felt for them was unparalleled. During the later years of life, David loved to attend concerts with his daughter Jessica, including artists like Paul McCartney, Bob Seger, Don Henley and the Beatles Tribute Band, Rain.

David regularly traveled to Phoenix to visit his daughters and grandson. He loved to just spend time with them, whether it was swimming, trying new restaurants, telling stories, watching movies or visiting close friends. Most nights would end with some cocktails shared by all while David played his guitar and sang his girls’ favorite songs.

The last few years of life were difficult for David, with late-stage COPD and the threat of Covid, but that did not stop him from continuing to write music and connect in the ways he knew best with the people he loved.

David was famous for saying, “Family Strong” as family connection and legacy meant everything to him.

And while we feel our father was taken from us far too soon, we seek solace in the fact that his body and spirit are finally at peace. We are so grateful for and inspired by the memories we do have with our dad and we vow to continue to honor his legacy for as long as we live.

David was sadly preceded in death by his mother Elvira, his father, Harold, his two brothers, Frederick and Larry, and his niece, Callie Beatrice.

Plans for a Celebration of Life are still in progress at this time.

We expect to have more details in the next couple of weeks.

For friends or family members who wish to attend, please contact David’s daughter, Jessica, by telephone at: (928) 224-9662 or by email at jessicakellerman@gmail.com. This telephone number has been set up exclusively for David’s Celebration of Life Festivities.

Our father would not have wanted flowers cut and would not have asked for a donation of any kind, but if you are inclined to make a donation in his name, we would ask that you make one that would aid in cancer research (on behalf of his mother) or helping those suffering from respiratory illnesses (as he did for so long).

Thank you to everyone who touched our father’s life. His memory now lives on in you.