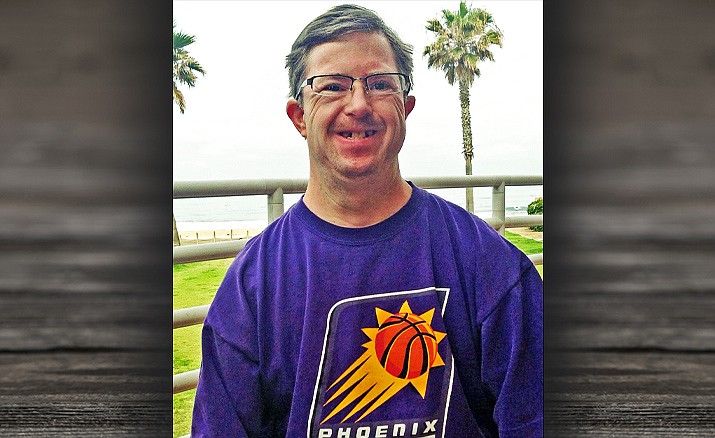 He was born in Libertyville, Illinois to Albert and Patricia Coomer on May 27, 1963.

Preceded in death by his parents and sister-in-law Kathryn Montaño, Dan is survived by his partner and love of his life Susan Taylor of Prescott; brothers John (JoLayne) Coomer of Chino Valley; William (Lourdes) Coomer of Scottsdale; Patrick (Stacey) Coomer of Gladstone, Oregon; a niece; six nephews; and four great nephews.

Born with Down Syndrome when children with intellectual disabilities were often institutionalized, Dan was raised at home with his three brothers. He attended a special needs preschool in Tempe that his parents helped establish, and the Mary C. O’Brien Accommodation School at 11 Mile Corner.

When he turned 18, he proudly announced he was a man, and to call him Dan, not Danny. Only very old friends continued to call him Danny. Not long after, Dan insisted that he move to his “own place” and lived in group homes in Tucson, Prescott, and Prescott Valley since that time.

Dan and his family attended the very first Special Olympics Games in Arizona in 1969 to learn of the organization that became a major part of his life until 2020, when COVID required him to be quarantined for an extended period. Dan was selected for three World Special Olympics games in 1979, 1983, and 1991. He competed in Unified Golf, Bowling, and Basketball beginning in the early 1990’s before Unified Sports became the very popular program it is now. He also was a regular with Horses with Hearts, a Chino Valley based equestrian program for people with various disabilities.

He worked at Yavapai Exceptional Industries from for about 18 years until the COVID quarantine in 2020. He loved to dance, listen to country music, and was a big fan of the Phoenix Suns, Arizona Diamondbacks, and Arizona Cardinals. He enjoyed SNAP (City of Prescott Special Needs Activity Program) dances and other activities, was a member of the Heavenly Chimers and Beautiful Signers.

Dan started showing signs of early onset dementia in his early to mid 50’s, not uncommon for people with Down Syndrome. During the COVID quarantine, his dementia progressed more rapidly until it became very aggressive this year.