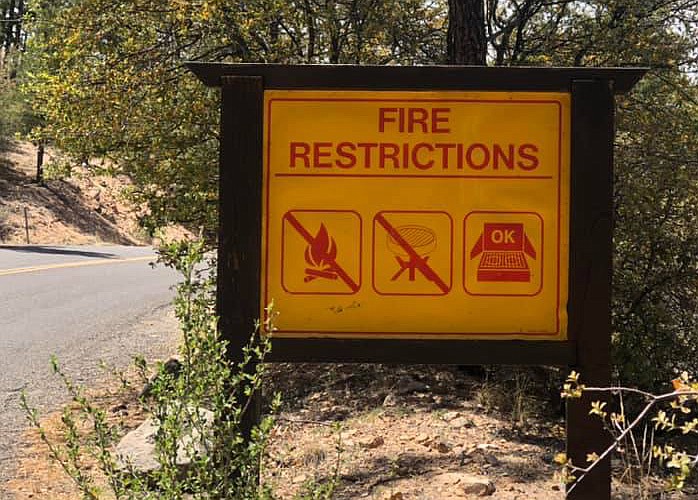 The county had instituted Stage II fire restrictions and an outdoor fire ban in May in the wake of the Crooks Fire, which burned about 9,400 acres some 12 miles south of Prescott from late April through early May on the Prescott National Forest.

Those involved in the meeting say they thought it appropriate to remove all fire restrictions. Stage II restrictions prohibit issuing residential or commercial burn permits, among other things (visit bit.ly/3cfU5FW for more information).

“There has been an increase in precipitation within the County,” Ahlquist stated in a July 14 news release. “Prescott National Forest has seen anywhere from 0.66” [six-tenths of an inch] to 4.66” throughout the forest. In addition to the increased precipitation, the forecast for continuing rain in the coming weeks and the moderating fire indices support rescinding the restrictions.”

“We recognize the inconvenience of imposing these restrictions in our communities, but I appreciate everyone who worked hard to protect our local forests and homes,” Mallory added in the release. “The fire danger within Yavapai County is a significant concern, and we appreciate your efforts to protect our great County.”

Despite lifting its fire restrictions, Prescott National Forest officials stated that the fire danger remains high across the forest, even with the precipitation it has received thus far.

“Visitors are still asked to remain vigilant and avoid activities that could accidentally cause wildfires,” the Forest Service added in a July 14 news release.

Specifically, recreation enthusiasts and campers on the forest should “refrain from campfires on dry and windy days and remember that it is always illegal to leave a campfire unattended,” the release added.

Fireworks are also prohibited on any National Forest lands.

Weather forecast for the Quad Cities

Embry-Riddle Meteorology Professor Curtis James reported on Monday, July 11, that the hot temperatures the Quad Cities have been experiencing over the past few weeks would cool by a few degrees this week.

With a high near 95 on Monday, high temperatures are expected to lower to 90 degrees by Sunday, July 17. With morning lows in the upper 60s, James said, chances for “a gradual increase in moisture” in the afternoons and early evenings were anticipated throughout the week.

James added that thunderstorms would be slow-moving, traveling at about 5 mph toward the west or southwest, and “generally short-lived,” or less than an hour long. Nevertheless, he stated, these storms are capable of “locally heavy rain, strong gusty winds, small hail, and cloud-to-ground lightning.”

“As is typical for this time of year when the continent heats up, a dome of high pressure has now become entrenched over northern Arizona and southern Utah at [the] mid- and upper-levels of the atmosphere,” James reported. “At the surface, there is a thermal low pressure centered over western Arizona, southern Nevada, and eastern California. This is a very typical monsoonal flow pattern for the Southwestern U.S.”

Dew-point temperatures hovered in the 40s Monday, but they were forecasted to rise into the 50s late this week and potentially into the 60s next week of July 17, James added.

Thunderstorms in the Quad Cities are expected to continue being more widely scattered into next week. Most of the storms will be single-cell or air-mass storms, James stated, because winds “will generally not shear enough with height to organize stronger thunderstorms.”

Fire restrictions remain in other parts of Arizona