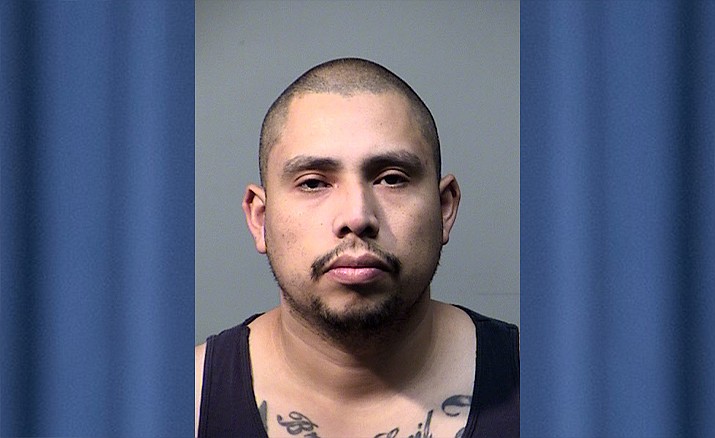 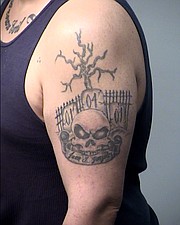 Tattoo on left arm of Morales.

In July of 2019, Morales went to his son’s school in Chino Valley and told the office staff he wanted to see his son, but he was not on the child’s contact list, nor did he know what grade the child was in. Morales wrote a note threatening the school staff and law enforcement and handed it to a school employee. The Chino Valley Police Department was called, and officers went to the child’s home, as they were afraid for the safety of the family after speaking to a family member on the phone.

The officers contacted Morales outside the family home in the 1000 block of El Rancho Road in Chino Valley. Morales walked away from the officers and attempted to enter the home, but the family had locked the door as Morales had threatened to kill one of the family members. Morales then kicked the door breaking the door. The officers attempted to arrest him, but he fought with them biting one officer, taking an officer to the ground and making multiple attempts to take an officer’s gun out of its holster. Both officers were later treated for lacerations and potential blood-borne pathogen exposure. 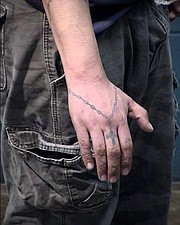 Tattoo on right hand of Morales.

Morales was charged with two counts of aggravated assault on law enforcement, three counts of threatening and intimidating, resisting arrest and criminal trespass. He was convicted and placed on probation and has since violated that probation. He is now wanted on a nationwide extraditable warrant with a $25,000 bond.

Morales is a 35-year-old Hispanic male, 5 feet 8 inches, 235 pounds with black hair and brown eyes. He has multiple tattoos to include a skull on his left upper arm and a chain with a cross on his right hand. His last known address was in Chino Valley.