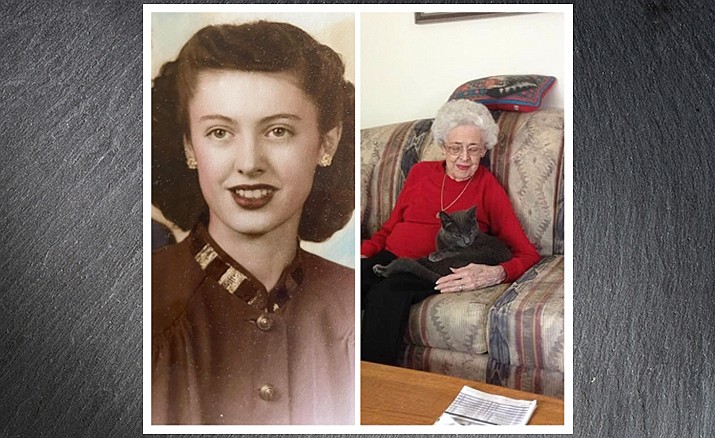 Our Mom, Olith Grace (Sweet) Hovey, left us at 10:35 pm on New Year’s Eve, December 31, 2021. She elected not to welcome in 2022. Born December 19, 1927 to Russell and Louella Sweet in Detroit, she often spoke fondly of childhood summers spent on her grandparent’s farm in Morenci.

Mom epitomized her middle name, Grace. She obtained Bachelors and Masters degrees from Michigan State University and taught all grades except Kindergarten for 30 years, the last 15 in Holt, Michigan. She also taught Basic Skills to U. S. Army soldiers during a 10-month Sabbatical in Italy. She had three sons by birth, and acquired another six sons and daughters through marriage to the love of her life, Ed Hovey.

She and Ed embarked on a series of adventures in retirement, leading them to multiple European excursions and a trip to Asia. They settled for over 20 years in Prescott, Arizona where they delighted in the picturesque scenery and the company of amazing friends. Returning to Michigan in 2008, they lived in senior facilities. Ed passed in 2010, and she decided that assisted living was not a necessity for her. For five years, she lived in a beautiful little house in Grand Ledge before returning to Independence Village of Grand Ledge for her final six years.

Olith was preceded in death by her Mom and Dad; husband of 45 years, Ed Hovey; son, Tom Hovey and daughter Candace Glaister. She is survived by sons Charles (Robin), Tom (Janet) and Dan Renton, Phil (Louise), John (Monica) Hovey and daughters Margaret (Scott) Truax and Sue Desmond and daughter-in-law Terri Hovey Randell. Additionally, she leaves a host of grandchildren and great-grandchildren and in a long line of feline friends; Mike, who stayed faithfully by her side until the end.

Loved, honored and respected by all of her children, grandchildren and great grandchildren, she will be sorely missed. Bon Voyage Mom!

In lieu of flowers the family wishes for you to make a donation to your charity of choice in Olith’s name.