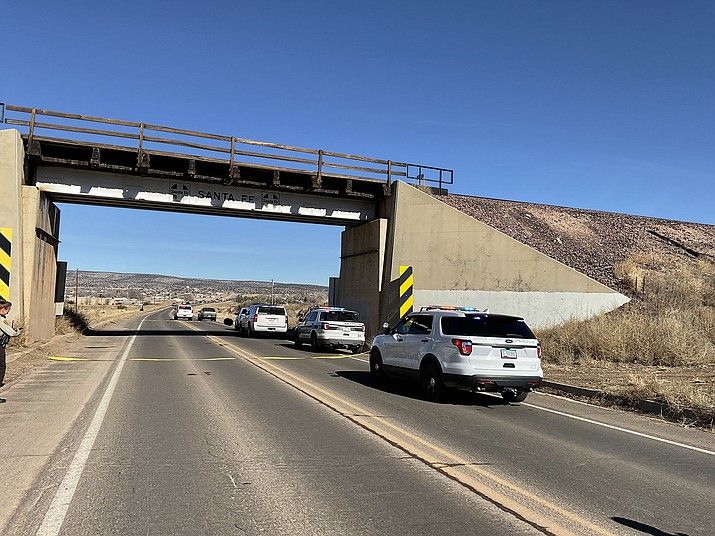 Greene said at about 4 p.m. the highway is now open; expect delays.

YCSO responded to the domestic dispute at about 10:15 a.m., which had resulted in the suspect critically injuring one man and severely injuring another person, a news release stated early Tuesday afternoon.

“Current reports are that the unidentified suspect assaulted his brother with a hammer and fled the home on Bourbon Alley to the nearby (Family Dollar store), where he robbed the store and assaulted the manager,” the release added.

The suspect subsequently drove to the Paulden Community Center, 24050 N. Marblehead Ave., where he threatened occupants with a gun, the release stated.

After the suspect left the community center, YCSO deputies and Chino Valley Police say they found him near a train trestle off of North Highway 89, not far from the Family Dollar store.

“Despite repeated warnings from law enforcement, the suspect raised his gun to the officers, and Chino Valley P.D. was forced to fire on the man,” authorities added.

The suspect’s brother was airlifted to Flagstaff Medical Center with life-threatening injuries, but YCSO reported that it does not know the brother’s current condition. The Dollar store's manager was taken to Yavapai Regional Medical Center in Prescott for his injuries, which the Sheriff’s Office added were not believed to be as severe.

Arizona Department of Public Safety (DPS) officers, YCSO detectives and crime scene investigators remained on the scene into the afternoon.

North Highway 89 was closed from Interstate 40 to Big Chino Road into the afternoon. The highway’s northbound lanes were closed at the Paulden Post Office. (Update at 4 p.m.: the highway is now open, but expect delays.)

“YCSO anticipates opening the freeway within the next few hours [at around 5 p.m.] but asks that residents find alternative routes until such time,” a YCSO news release reported in the early afternoon.

Arizona Department of Transportation (ADOT) officials stated in a news release early Tuesday afternoon that the incident closed Highway 89 in both directions between mileposts 337 and 338 in Paulden.

“When a freeway closure or other major traffic event occurs, our free app is available at ADOTAlerts.com,” the release added. “[It] will send critical information directly to app users in affected areas, where possible, in advance of alternate routes.”

Watch dCourier.com and The Daily Courier for more details on this incident as they become available.

Editor's Note: This article was updated at about 4 p.m. to state YCSO has reopened the highway; expect delays. Also the name of the business is Family Dollar.