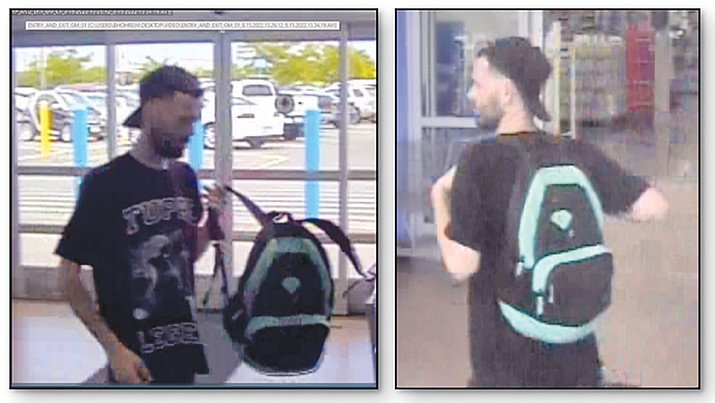 The Prescott Valley Police Department is asking for the public’s help in trying to identify this man in connection with a theft that occurred Monday, Aug. 15, 2022, at Walmart, 3450 N. Glassford Hill Road. (Courtesy images)

The Prescott Valley Police Department (PVPD) is asking for the public’s help in trying to identify the suspect in a theft that occurred Monday, Aug. 15, at Walmart, 3450 N. Glassford Hill Road.

At around 2:30 p.m., a man allegedly stole a woman’s wallet/handbag from a cart at Walmart in Prescott Valley, police said. The victim’s wallet has a leopard print and contained credit cards and personal identifying information.

Police said the suspect appears to be a white man with a dark beard and brown hair with a faded cut.

The suspect appeared to have tattoos on his right forearm. He was wearing a dark-colored printed T-shirt with white print on the front and dark pants, police added, and carrying a black-and-teal Diamond Supply Co. brand backpack.