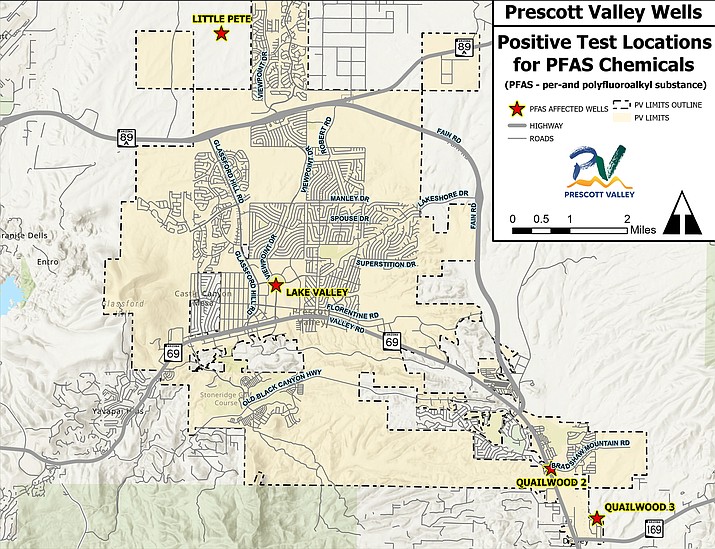 Prescott Valley has shut down four of its 27 wells after measurable amounts of PFAS chemicals were found in their water, the town stated in a news release Thursday, Aug. 11.

After the City of Prescott announced in July that it had shut down two of its wells near the Prescott Regional Airport because of positive tests for Per- and Polyfluoroalkyl substances (PFAS), the Town of Prescott Valley immediately tested all but two of its 27 wells (the two were offline). Of the 25 wells tested, four were found to have measurable amounts of the chemicals in the water pumped, town officials stated.

One of the tests was considered uncertain, so that well is being retested to ensure there was no testing error, they added.

As part of an earlier Environmental Protection Agency (EPA) monitoring program, the town had tested all of its upper system wells for these same chemicals in 2014-15, and three wells in its lower system in 2018, all with negative results. Based on the results of this follow-up test, the town has shut down all four of the wells that tested positive this year and will follow up with a plan for further action that includes consulting with the Arizona Department of Environmental Quality.

The four wells are Little Pete and Lake Valley in central Prescott Valley, and Quailwood 2 and 3 in east Prescott Valley, according to the news release. The town’s wells are interconnected so water can be moved to different areas to serve the community during repairs or shutdowns. 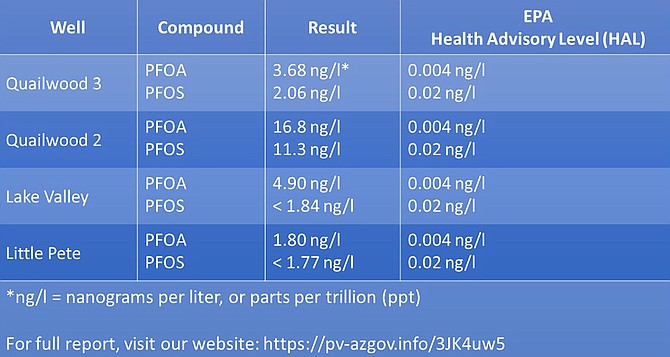 Per- and Polyfluoroalkyl substances (PFAS), sometimes referred to as “forever chemicals,” are not currently regulated by the EPA, but the agency has advised that exposure to high levels of these chemicals may be harmful to human health. In June 2022, the EPA significantly reduced the health advisory levels for the chemicals.

Other communities throughout Arizona and the nation are also experiencing positive tests for PFAS with the lowered testing threshold. According to the news release, the chemicals are commonly found in some grease-resistant paper such as in fast-food containers, pizza boxes, stain resistant coatings, water resistant clothing, some cleaning and personal care products, paint products, and aqueous firefighting foams.

For additional questions, call the Prescott Valley Utilities Department at 928-759-3070 or visit www.prescottvalley-az.gov.

Information provided by the Town of Prescott Valley.