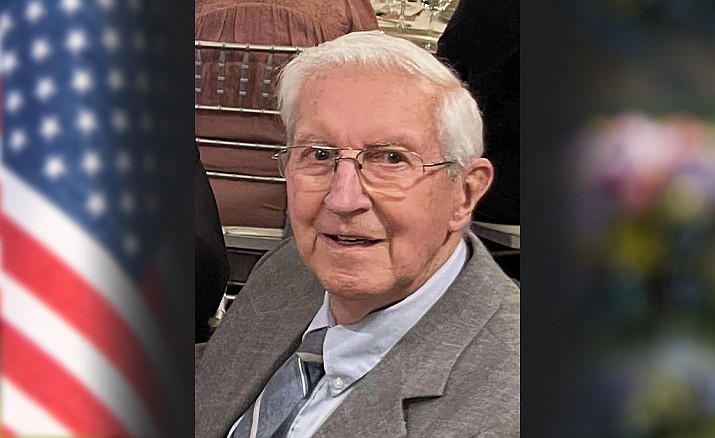 Gerald started his own company, Kimmet’s Electric Co. in Ottawa, Ohio in 1959, which he owned and operated for over 50 years, specializing first in home electrical appliances, then in both residential and commercial electrical contracting. Gerald was a volunteer fireman with the village of Ottawa Fire Department and a Special Deputy Sheriff with the Putnam County Sheriff’s Department. In 1975, Gerald moved his family from Ohio to Prescott, Arizona where he continued Kimmet’s Electric Co. until he retired in 2009. From 1997 to 2010, Gerald worked part-time at Home Depot, in the electrical dept. and also the Pro-Desk, in Prescott and Prescott Valley.

Gerald joined the Yavapai County Sheriff’s Jeep Posse, a volunteer search and rescue organization, in 1978. He was elected as the Captain in 1982, 1991, 1993 and 1994, and was the Treasurer for over 19 years. He was instrumental in the construction of the Jeep Posse Meeting Hall and Training Center, located in Pioneer Park, Prescott. For over 20 years, Gerald was in charge of several additions and revisions to the Training Center. During the 1990s, he was a licensed EMT with the state of Arizona, which aided in his search and rescue duties. His favorite activity was organizing the safety checkpoints and route layouts for the Gheral Brownlow Man Against Horse Race held annually on Mingus Mountain. Gerald retired from the Jeep Posse in 2018, after 40 years of specialized and dedicated volunteer service. He was recently recognized by the Yavapai County Sheriff’s Department for this accomplishment.

While living in Prescott, Gerald and Marilyn were members of Sacred Heart Catholic Church, and St. Germaine Catholic Church, Prescott Valley. Gerald was a life-member of the Knights of Columbus, a member of the Mile-Hi Kiwanis Club (serving as President from 1982-83) and elected to serve on the Yavapai Regional Medical Center (YRMC) Hospital Board during the 1980s.

Gerald enjoyed the outdoors, hiking, boating, geocaching and was an expert tracker. He liked reading, studying the family history and woodworking projects in his shop. In 2019, Gerald was privileged to travel on the Arizona Honor Flight, which flies veterans from the WWII and Korean War eras to Washington, D.C., to view numerous military monuments in and around our nation’s capital. He was accompanied by his two sons, Joel and Jim, and thoroughly appreciated the experience.

A funeral Mass will be held at St. Germaine Catholic Church, Prescott Valley, on Friday, August 19, 2022, at 10:00 a.m., preceded by a rosary service at 9:30 a.m., and immediately followed by a reception at the church hall. Interment with military honors will be 2:00 p.m., at Prescott National Cemetery.

Arrangements have been entrusted to Hampton Funeral Home. Please visit www.hamptonfuneralhome.com to sign the online guestbook and share a memory with the family. The family asks that memorial donations be made to the Yavapai County Jeep Posse. Visit www.ycjp.org to make a donation in Gerald’s name for the Jeep Posse Training Center.