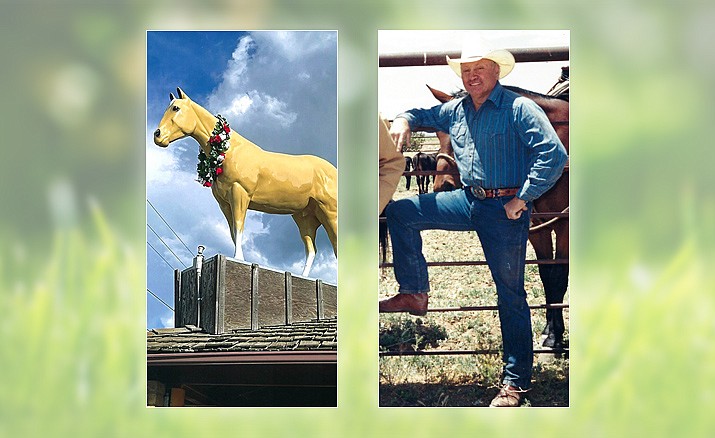 Arthur Caeser Savoini: loving Husband, father, friend to all that knew him, and Cowboy, passed away peacefully at home on July 28th, 2022. “Artie,” as he was known to his closest family and friends, was 84 years old.

Arthur Savoini was born February 14th, 1938, in Cottonwood, Arizona. He was the third son born to Costantino and Leonita (Gilardi) Savoini. He lived in Cottonwood at the Verde District Dairy until his family, along with the Fornara family (Arthur’s cousins) moved to Prescott in 1940 and started the Hassayampa Dairy. There, he would be raised at the “Big House” by his parents and his large extended family. As a boy, Arthur attended St. Joseph’s Academy through his elementary school years. He then attended Prescott High School, graduating in 1956. Arthur was a star athlete in High School, earning multiple all-state accolades in three sports--football, basketball, and track. He was eventually inducted into the Prescott High School Athletic Hall of Fame, where his picture resides to this day. He went on to study at Arizona State University, earning a degree in Animal Nutrition.

Growing up as a boy in the Savoini-Fornara families meant a lot time spent working at the family dairy and summers spent working at families’ JCJ Ranch/farm in the Big Chino Valley. It was his experiences at the dairy and the farm that would foster Arthur’s greatest passion in life--cattle and ranching. In 1969, Arthur (along with his brothers Joe and Jim) started the Savoini Cattle Company. They ran Black Angus crossbred cattle on various leases throughout Northern Arizona until 2012. Arthur loved ranch life the most, and he was the happiest when he was horseback. He was also very handy with a rope and won many ropings and rodeos with his Brother Jim, and countless other Cowboys. In 1970, Arthur and Jim qualified for the National Finals Rodeo in Oklahoma City, OK, and the following year Arthur won the Wild Cow Milking event at The Prescott Frontier Days rodeo. He was a member of the Professional Rodeo Cowboys Association for many years, and a member of the Arizona Cowpunchers Association until the time of his death. He was also a life member of the Yavapai County Mounted Sheriff’s Posse, serving as its President in 1979.

On September 7, 1963, Arthur married the love of his life, Cora Sue Kellerman, at Sacred Heart Catholic church in downtown Prescott. They remained married for 58 years, up until his passing. They shared a great life of love and companionship together, raising three boys: twins James and Joseph, and younger brother Thomas. That same year, Arthur and Susie, along with Arthur’s older brother Joe, opened Savoini’s Western Wear Feed & Tack on Iron Springs Road. The “Feed Store” was the hub of activity in Prescott and Arthur held court at the “BS” counter every day for the many friends and regulars that would come and visit.. The “Feed Store” served the greater Prescott community for 54 years until the family made the decision to close it in 2017. Arthur was always quick to help with his expert knowledge and advise on all things cattle and horses and he loved to help people.

Arthur had a profound love for the outdoors, naturally, and he loved to hunt and fish as often as he could.. He shared that love with his boys, his big family, and the countless friends that he had. He was a crack-shot, and custom built many of the rifles that are still in the family to this day. Great memories were made around many a campfire on the ranches surrounding the family farm in Big Chino--and Arthur especially loved to hunt on the ORO Ranch north of Prescott.

Even as his health declined in the last years of his life, Arthur never complained. He loved everyone he met. He always had a smile on his face and an encouraging word to lift your spirits if you needed it. He was a mentor to the many young employees that worked for him at the Feed Store over the years, and kept in contact with a great many of them throughout his life. He was generous to a fault, and truly was that guy that would literally give you the shirt off of his back if he thought you needed it. Arthur’s one-of-a-kind wit and unique brand of humor endeared him to all of his family and friends, and this life-long Prescottonian will truly be missed.

There will be a Funeral Mass held at 12:00pm, August 12th, 2022 at Sacred Heart Catholic Church in Prescott and a Celebration of Life at the Prescott Frontier Days Rodeo grounds at 2:00pm following the Funeral Mass. The family suggests that memorials made in Arthur’s name be made to the Yavapai County Mounted Sheriff’s Posse Scholarship Fund; P.O. Box 95, Prescott, AZ 86302.