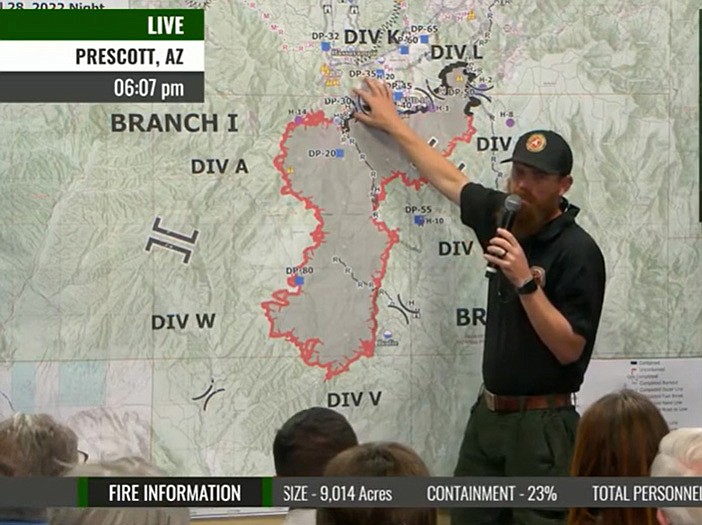 Residents received some optimistic news Thursday night regarding the progress of fighting the Crooks Fire near Palace Station south of Prescott.

During a community meeting at Embry Riddle University, Operations Section Chief Kyle Jacobson told attendees that the northern end of the fire, in the Camp Kippa, Mount Union and Mount Davis area is holding to its current footprint.

The blaze has reached 9,014 acres with 23% containment. There are 855 personnel fighting the fire, with fixed-wing aircraft, helicopters and heavy equipment.

“It is a rarity to have as much air support as we have,” said Incident Commander Rocky Opliger of Interagency California Team 4.

Jacobson said crews are also making progress in the Five-Points, Moscow Peak, Yankee Doodle Peak area, “and we expect to see increased containment in the next few days.”

Jacobson also said there has been no real perimeter growth on the south end of the fire, “so we’re getting close to picking up the Eastern flank.”

“We haven’t seen much fire growth in the west, he continued. “There aren’t many access roads in the Johnson Flat area, so we’ve been utilizing helicopters to shuttle crews in.”

“Everything is holding in the area of 52B Road,” he said. “That’s a critical piece of the line.”

“There have been extremely windy conditions, and it’s extremely steep terrain, but despite all that, the crews have been doing everything they can to contain the fire.”

Sheriff David Rhodes told the meeting attendees that the Yavapai County Sheriff’s Office, in coordination with other agencies, is evaluating evacuation statuses several times a day “so at the earliest time possible, we can repopulate all areas, so everybody can go home.

There must be reasonably safe conditions before the evacuations can be lifted, he said, thanking residents for their patience and cooperation.

“Your cooperation makes this possible,” he said. It makes it safe. We know it’s inconvenient, but we are evaluating the situation several times a day.

Rhodes also had a warning for anyone who is entering closed areas to get a closer look at the fire.

“The time for warning has passed,” he said, explaining that the office has received reports and observed individuals in areas designated as closed. “We will take enforcement action if we catch anyone back there who shouldn’t be back there.”

The northern Walker Road area is still on SET status, as are Groom Creek and Ponderosa Park. Breezy Pines has been evacuated.

“With the wind, things that look safe can become very unsafe quickly,” he said.

YCSO is monitoring its Facebook page, he said, to answer residents’ questions about evacuation status.

Regarding the upcoming Whiskey Row Off Road races this weekend, she said the Forest Service and other agencies are “very very confident that there is no threat to anyone in town” during the event, and that a new air quality monitor has been installed close to the courthouse plaza in Prescott.

Clawson also urged residents to “do everything you can to make your house defensible” against fires. That includes clearing brush, cleaning gutters and moving wood piles away from the structure.

“If you have been waiting to do this, please don’t put it off any longer,” she said.

Responding to residents questions about the use of aircraft, Agency Administrator Jake Guadiana said aircraft was immediately dispatched, but must be used in conjunction with crews on the ground when battling the fire. If slurry fire retardant is dropped and gets caught in the crown of trees, he said, it will dry eventually and the fire will burn right through it.

Jacobson responded to a question about a 9 a.m. or 10 a.m. start to daytime activity on the fire by explaining that the crews for the fire are thoroughly briefed beginning at 5:30 a.m.

“We also have to coordinate the night resources with the day resources,” he said. “We are certainly not working bankers’ hours. Many of the crews are working 16-plus hours a day.

Aviation operations, he said, usually begin about 8 a.m. and factors such as the limit on flight hours for pilots and daylight conditions for effectively dropping retardant on the fire have to be taken into account.

A video replay of the meeting is available at youtube.com/watch?v=76FIn1LHc9w.