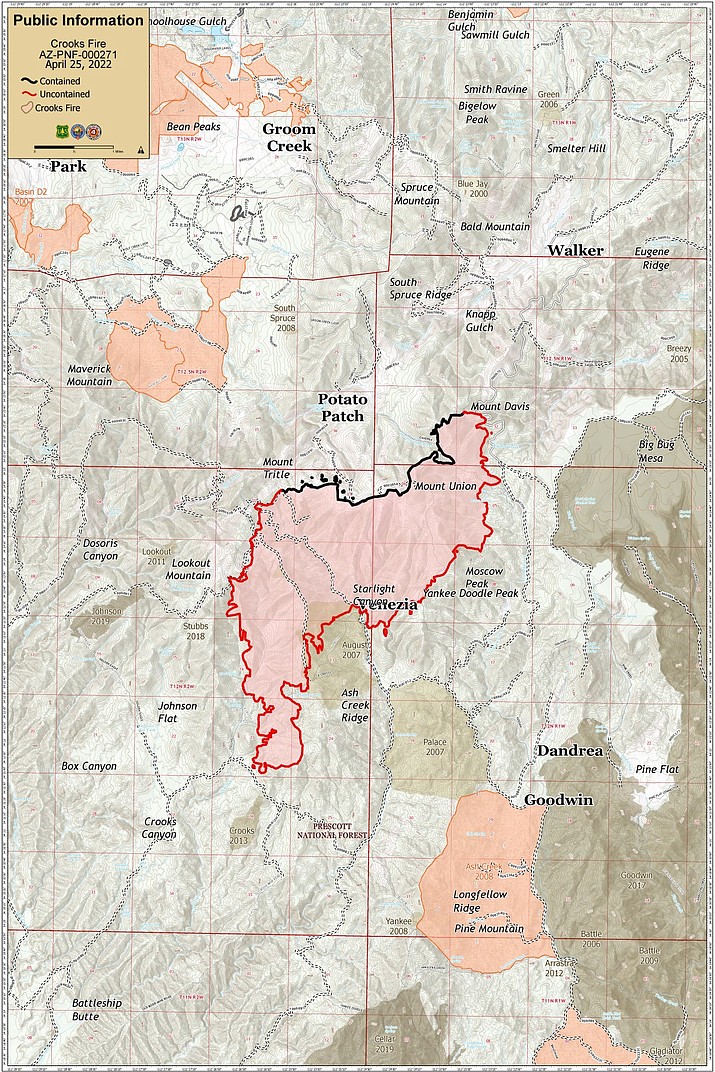 The Crooks Fire, burning near Mt. Union 10 miles south of Prescott on the Bradshaw Ranger District, has spread to 3,914 acres, but it is now 22% contained, Prescott National Forest officials reported the morning of April 25.

The fire started April 18, and its cause remains under investigation. Flames from the fire continue to burn brush, ponderosa pine and mixed confer trees, as 675 personnel are now fighting the blaze.

Crews continued to mop up and secure the north and northeast flanks of the Crooks Fire.

“Throughout the day and into the night [of April 24], firefighters extended the line south of Lookout Mountain towards Ash Creek, and from Moscow Peak west to Senator Highway,” the release added.

On April 25, firefighters made Ash Creek their priority.

“Fire crews will be working diligently in the southwest part of the fire to control growth that occurred last night [April 25],” the release stated. “Further efforts will be to build direct line from Yankee Doodle Peak working west towards Senator Highway.”

Fire managers are planning contingency lines to the south and west of the fire in case weather conditions push the fire in those directions.

What follows is other pertinent information related to the Crooks Fire.

Weather: Dry weather conditions persist over the fire, with afternoon humidity in the 5-10% range on April 25. Wind was expected to be slight, mostly driven by the terrain, and vary throughout the day in direction and speed, the release stated.

Evacuations: YCSO announced that evacuations would be lifted at 3 p.m. April 25 in North Walker. For more information, visit YCSO’s Facebook page at facebook.com/YavapaiCountySheriff/.

Forest closure: To protect public health and safety due to firefighting operations and fire danger associated with the Crooks Fire, the Prescott National Forest has implemented a fire area emergency closure.