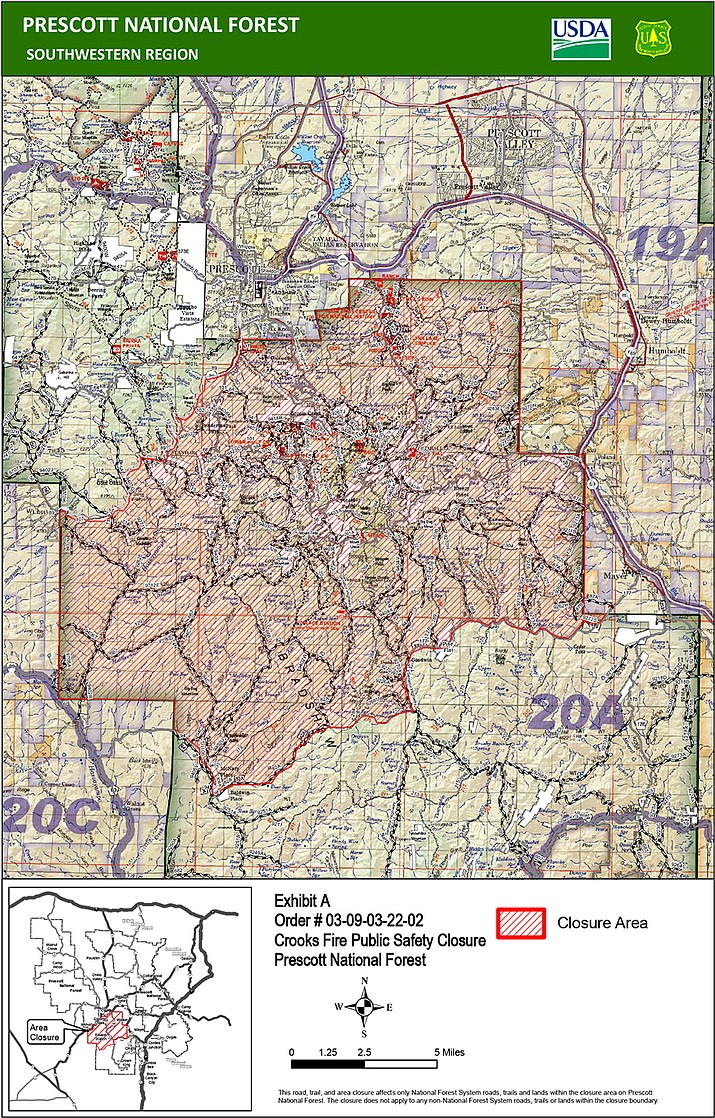 The Crooks Fire remained active overnight April 21 and 22, spreading to about 2,356 acres on the Bradshaw Ranger District near Mt. Union, the Southern California Interagency Incident Management Team reported the morning of April 22.

Firefighters say the blaze, which started April 18 and is located about 10 miles south of Prescott, remains at zero% containment as it burns brush and ponderosa pine and mixed conifer trees.

Some 359 personnel are now battling the fire, the cause for which remains under investigation, the Incident Management Team stated in a news release.

“Strong winds will continue to test fire lines,” the release added. “The fire had minimal growth to the northeast and west of Senator Highway. Large diameter dead and downed fuels continue to burn along the perimeter and interior, increasing smoke, which can be seen in the surrounding communities.”

With communities still threatened by the fire, protecting structures remains a priority where it is safe for firefighters to do so.

“Firefighters continue to build direct and indirect line construction in areas offering potential success of line holding,” the release stated. “[Friday’s] wind will continue to test fire lines along the north east edge of the fire.”

During the initial attack on the fire April 21, two outbuildings were damaged, the release added. The Incident Management Team says it will release information on property damages once it has verified the locations and notified the property owners.

“We would like to remind the communities that firefighter and public safety remain the number one objective,” the release added. “We want to make sure your communities are safe before we allow anyone to return home.”

What follows is other pertinent information related to firefighting efforts.

Weather: A passing weather system will bring cool and windy conditions April 22, the release stated. “Afternoon humidity is predicted to be 40% [and] light rain is possible,” the release added. “The greatest hazard will be strong Southwest winds, with the potential for gusts to 40 mph near ridgetops and through aligned drainages. Decreased wind is forecast for the weekend [of April 23 and 24], along with a warming trend and decreased humidity.”

Evacuations: Information about current evacuations can be found on the Yavapai County Sheriff’s Office’s (YCSO) Facebook page at facebook.com/YavapaiCountySheriff/.

Forest Closure: To protect public health and safety due to firefighting operations and the dangers associated with the Crooks Fire, the Prescott National Forest has implemented a fire area emergency closure. To view the Crooks Fire area closure order and map, visit bit.ly/3L7F9Gx. 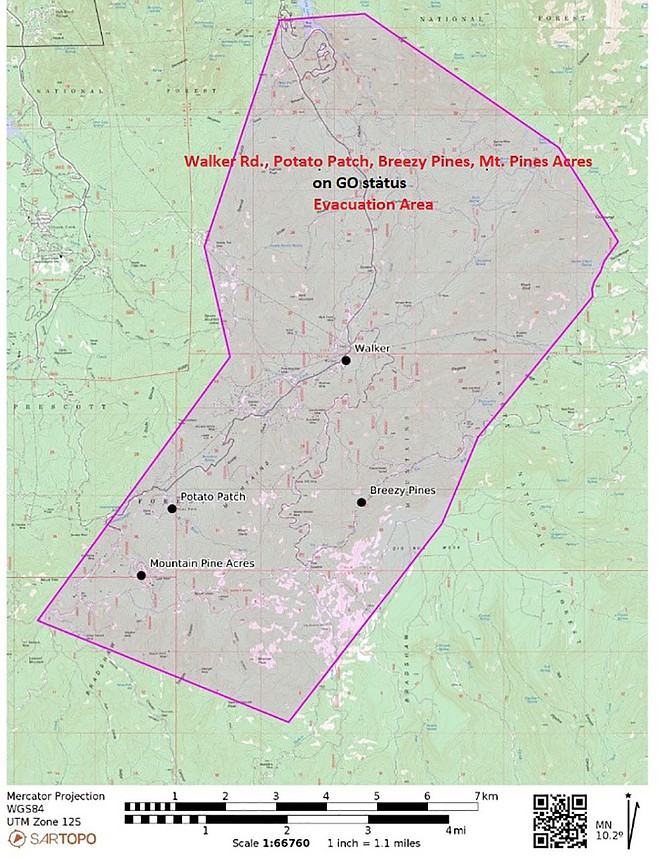 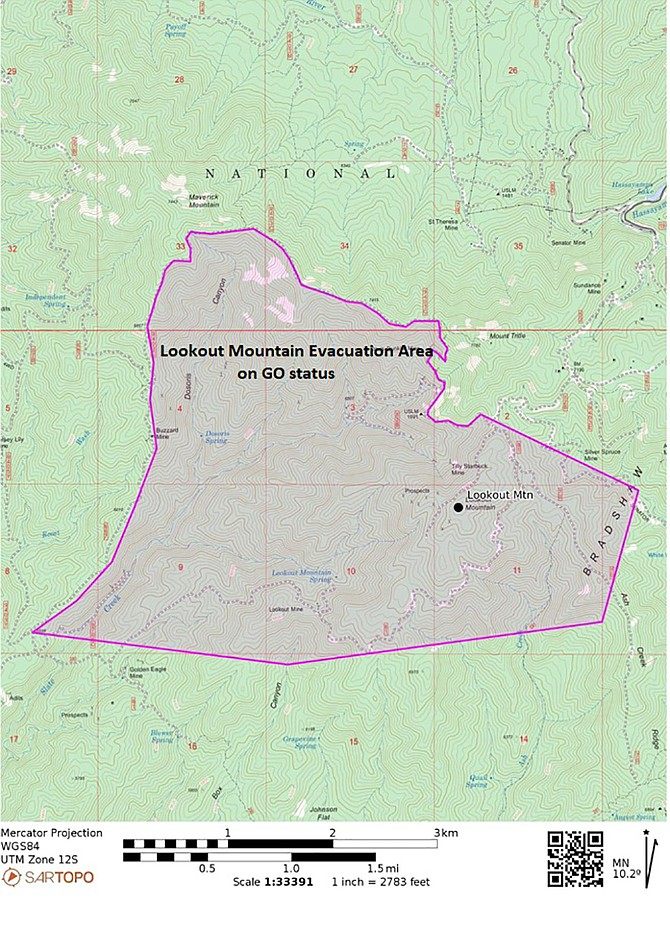 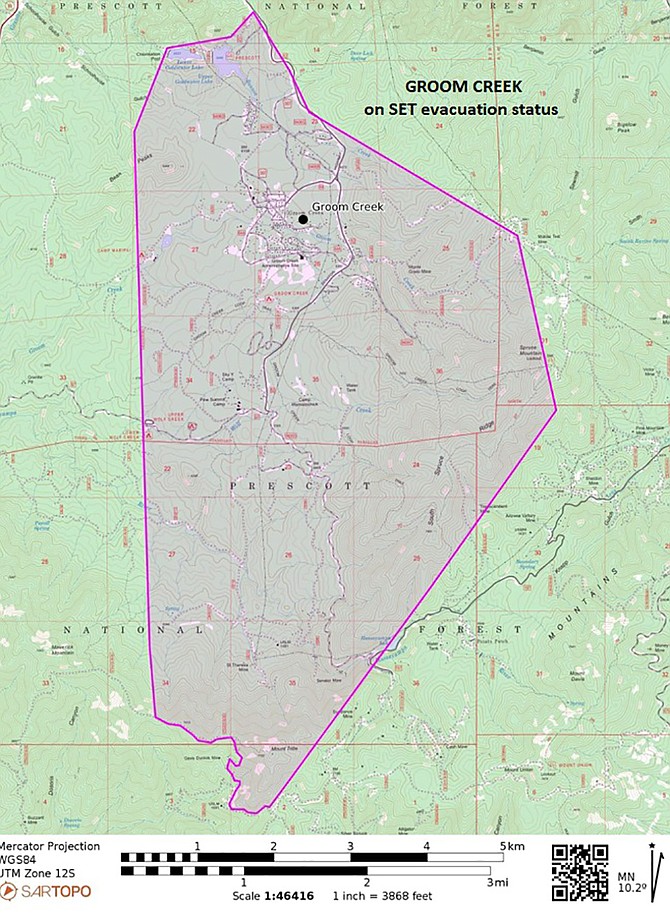 Groom Creek is in SET status