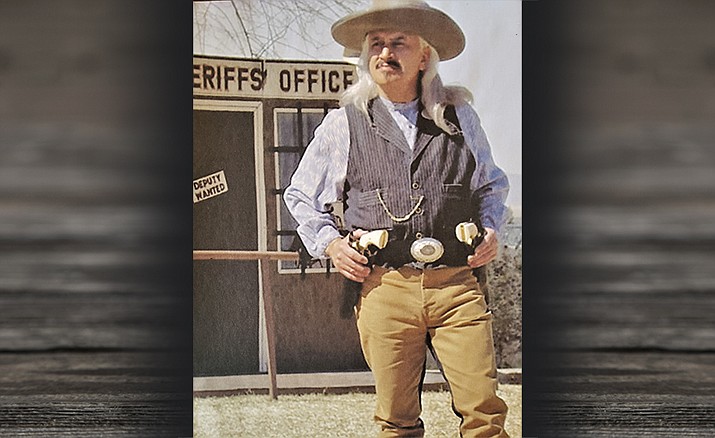 It is my very sad duty to report the passing of John Ralph Larkin, a great Old West re-enactor, historian and friend. John was born January 19, 1949 and passed August 30, 2021 at the age of 72, quietly at home with friends present. He was diagnosed with a recurrence of throat cancer that spread to his lungs and bones.

John was known for his individual historic presentations about larger-than-life Western heroes and villains. His presentations were both historically accurate and entertaining. He particularly enjoyed teaching young people and adults about the history of the Old West.

John was a very early member of the Prescott Regulators and Their Shady Ladies, joining the group in 2006. He was a true fan of the Old West and formed his own company “Legends of the West” prior to joining the Regulators. He was a long time member of another re-enactment group, the “Colorado River Riders” from Yuma, AZ, where John lived and worked prior to moving to Prescott.

John was a graduate of Florida State University and pursued a career in law enforcement and rose to the rank of Deputy Warden at the Florence Correctional Facility. John retired almost 20 years ago and spent much of his time studying the Old West and creating costumes to correctly represent the life style and the Legends of the West and formed a company of the same name.

John was heavily involved with the local community and served on the Board of Trustees at the Sharlot Hall Museum. He further participated in the community through his Christian service and beliefs.

John was a man who would literally give you the shirt off of his back, the hat off his head or the boots from his feet, and did this many times to members of the re-enactment community, or just people who liked his costume.

John had a great heart, a Christian soul and an historians eye. His love of all things Western showed through in his daily life. He believed in living the “Code of the West” and in “Riding for the Brand”. His word was his law and he tried to live each day in a Christian manner, honoring even the most humble.

John is survived by his sister, Dianna (Dee) Padilla and his father, Ralph Larkin.

A Celebration of Life is planned for John on November 6, 2021. Time and location to be announced.

Information was provided by the estate.