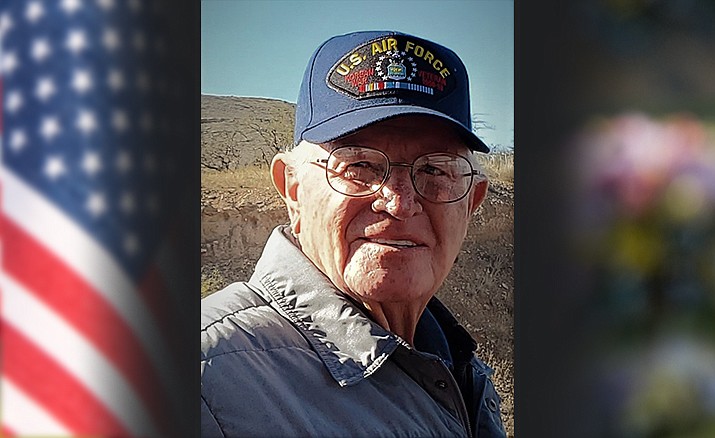 As a young boy his family moved to Huntington Beach, California. He loved growing up at the beach surfing, fishing and swimming, so much so he occasionally missed school. Gene signed up with the United States Air Force in 1951 and served two years at Brady Air Base in Japan during the Korean War. Next, Gene was stationed at Davis Monthan Air Force Base in Tucson, where he met the love of his life, Helena ‘Suzie’ Walton. Gene and Suzie married in 1955.

Always a hard worker and a salesman with an entrepreneurial spirit Gene started at least five different companies during his working career starting with Walton Casket Company. Gene and Suzie welcomed four children and eventually made Glendale, Arizona their home. As a young man Gene enjoyed waterskiing, bowling, and even got a pilot’s license so he could fly.

Gene and Suzie retired in 1996, moving to Orchard Ranch in Dewey. Soon Gene was part of the security team at Orchard Ranch, still working at the guard shack welcoming residents to the park two weeks before he passed. He was a man of grit and fierce independence mingled with kindness and enormous generosity. He and his wife were known for their hospitality and readiness to welcome a stranger.

Gene is survived by his children, Lorri (Lyle) Carlson of Prescott, AZ, Melinda (Mike Oldham) Cosgrove of Byers, CO, Greg Walton of Dewey, AZ and Gary Walton; six grandchildren; eight great grandchildren and many nieces and nephews. He is preceded in death by his parents, his wife and his siblings, Jesse James Jr., Billy Charles, Norma Kathleen, Tressie May, all of California and David Tom of Texas.

The family would like to thank the owners, the managers and the many residents of Orchard Ranch for all the lasting friendships.

The family would also like to thank the hospital staff at the Southern Arizona VA Health Care system for their extraordinary care and compassion during Gene’s last days.

The family will celebrate Gene’s life privately and there will be no formal services. Condolences may be sent to Family of Gene Walton C/O Lorri Carlson PO Box 12422 Prescott, AZ 86304.