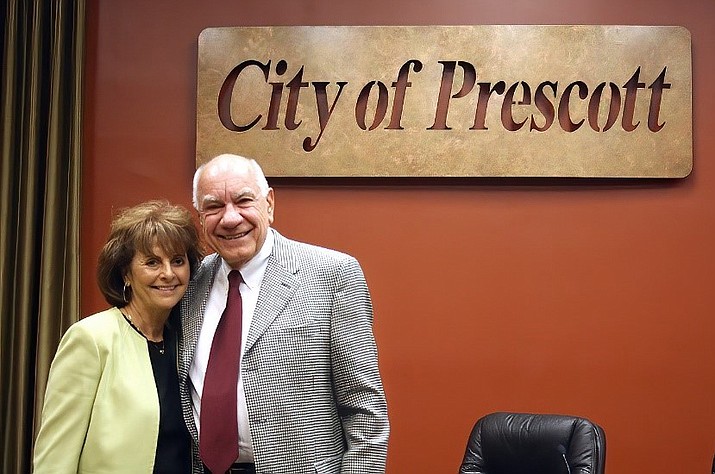 Marlin Dale Kuykendall, 86, passed away Sunday, Jan. 17, 2021, at his home in Prescott, Arizona. Marlin was born June 13, 1934, to Ollie and Dollie Kuykendall in Oklahoma, the youngest of 7 boys. His family moved to Plain View, Texas, when he was a toddler. Later, the family moved to Phoenix Arizona where he spent his teenage years. He graduated from Phoenix Technical School in 1951.

Marlin served in the U.S. Army in the 1950s and rose to the rank of Sergeant. When he completed his active-duty service, he was commissioned as an officer (after completing Officer Candidate School) in the Arizona National Guard during the late ’50s. He came to Prescott to serve as the 158th Infantry (Bushmasters) Company Commander in the late 1960s. The late Yavapai County Supervisor Gheral Brownlow was his Company First Sergeant. His support for veterans was limitless through his entire life. He continued to support men and women of the National Guard and Reserve for over 10 years while serving as the Northern AZ Chairman, Department of Defense Employer Support of the Guard and Reserve (ESGR).

Marlin moved to Prescott in the early ’60s and became the ultimate entrepreneur. He sold his prized Thunderbird to buy his first filling (gas) station. He loved to solve problems and start businesses. He became the Phillips 66 Area Distributor in 1964. He also brought the first Toyota automobile franchise to Prescott as the initial dealer in the late 1960s. This was before anyone knew what a Toyota was! Marlin would go on to start and own Kuykendall Motors a local Buick, Pontiac, GMC, and American Motors franchise. He also started Suzuki of Prescott a local motorcycle dealership. Eventually, he opened automobile dealerships in Sedona and Flagstaff bringing Fiat, Saab and used car facilities to those communities. Over the years he also owned automobile dealerships in Texas and New Mexico.

Marlin believed in the potential of Prescott Ernest A. Love Airport and started North Aire Training Center in the mid 1970s. He was a skilled pilot. He truly enjoyed flying and used this passion to fly friends to events and even helped the local funeral homes bring back loved ones after their passing. During a flight to Flagstaff, he had a major engine failure which caused the plane to crash outside of Flagstaff and was able to walk away unscathed.

Marlin was also the owner of the Colony Inn (now known as the Rodeway Inn) and then started Airport Centre (which consisted of a hotel, extended stay apartments, convenience store and offices) which provided a unique opportunity to combine his support for the airport and the need for lodging in Prescott. Many of the steel buildings across from Yavapai College were built by Marlin and were successful businesses that he had started until they were sold to the college. According to Marlin’s family, he loved Prescott from the minute he got here and wanted to help the city in any way he could. His focus was on providing jobs to for the citizens of Prescott through his business ventures.

Marlin served on Council several different times. He was elected to the Prescott City Council in 1971, and later was appointed to the Council in 1991 to fill the remainder of an unexpired term. In 2009, Marlin overwhelmingly won the Mayoral election. He went on to serve for 3 terms before choosing not to seek re-election for a 4th term in 2015.

He then met Tana and once married they worked together to build a beautiful dream home overlooking the Sea of Cortez. They loved to entertain family and guests and became part of the Rocky Point Mexico Community. Nothing could match Marlin’s wide, welcoming smile and hand clasp, or his droll sense of humor. Marlin was a great negotiator and an excellent Ambassador for the City of Prescott for over six decades. His willingness to listen and his personal charm brought this self-made man success in anything he put his mind to. He never met a stranger and was always willing to help others when needed. He was always very humble and wanted others to receive credit with little attention upon himself.

Marlin deeply loved his family and his wife, Tana, who passed away on Sept. 3, 2021, eight months after he did. They were married for 20 years. He is survived by his sons, Michael Kuykendall (Kim), Pat Kuykendall and Ren Kuykendall (Rebecca); stepchildren, Robin (Cherise) Hyslip and Nancy (Bill) Davis; grandchildren, Shawn (married to Ashley), Drew (married to Kelsie), Kaylee Finken (Brandon), Greyson, Griffin, and Georgia Kuykendall; and step grandchildren, Magen Roberson, Zac Wesson and Aaron Wesson. He is also survived by five great grandchildren. Marlin was preceded in death by his parents and older brothers.

Tana was born to Dorothy and Fred Barofsky on May 2, 1945, in Seattle, Washington. Later when she was 2, the family moved to Pasadena, California.

When Tana graduated from high school in Pasadena, she began her career as an Executive Secretary and Administrator and was known to be very efficient and organized. She was a planner in both her professional and personal life. Tana always had time for her family, and was a loving, unselfish sister. She was pleasant, but feisty, fun, and witty.

Tana was married to Marlin Kuykendall for 20 years, and easily settled into the Prescott lifestyle at that time. She was an excellent golfer and loved interior decorating. She was a gourmet cook, enjoyed traveling and tasting new cuisines. She was extremely patriotic and was proud to participate in local organizations such as the Republican Women of Prescott.

Tana was Marlin’s partner in every sense of the word. She loved being “First Lady” of Prescott and standing beside her husband while he served as Mayor of Prescott. She was outgoing, gracious, and charming. She collaborated with him in his numerous business ventures.

Tana and Marlin had a second home in Puerto Penasco (also known as Rocky Point), Mexico, where they frequently entertained friends and family. Tana loved Mexico and went as often as she could.

Tana was preceded in death by her parents; her youngest sister, Vicki, and her husband Marlin. She is survived by older brother, Doug (Lilo) Barofsky; younger sisters, Ora (Paul) Maikoski and Lora (Mike) Winn, and younger brother, James (Peggy) Alexander; plus, numerous stepchildren, nephews and nieces. In lieu of flowers, the families ask that donations be made to the following charities and organizations: American Cancer Society, US Vets, Prescott Yavapai Humane Society or Yavapai Exceptional Industries.

The families of Marlin and Tana would like to thank the staff at Thumb Butte Medical Center (Dr. Hojat Askari) and Arizona Oncology for their caring support and attentiveness as our loved ones battled cancer the past four years. We also want to give a special thanks to Compassus Hospice Care in Prescott Valley, for their professionalism, empathy, and compassion during the final transition of life for Marlin and Tana. We appreciate all the thoughts, prayers and kindness from the Prescott Community and Yavapai County over the past few years. The love of Prescott and the legacy of Marlin and Tana Kuykendall will never be forgotten but will grow stronger through our great group of friends and family!

A Public Memorial Service for both Marlin and Tana will be held on Thursday, Nov. 4, at 10 a.m., at the Grace Sparks Activity Center on East Gurley Street. From 5 to 7 p.m., a joint Celebration of Life for Marlin and Tana will be held for family and friends at the Prescott Centennial Center on 1989 Wineglass Drive. A private family interment will be at 1:30 p.m. at the Prescott National Cemetery.