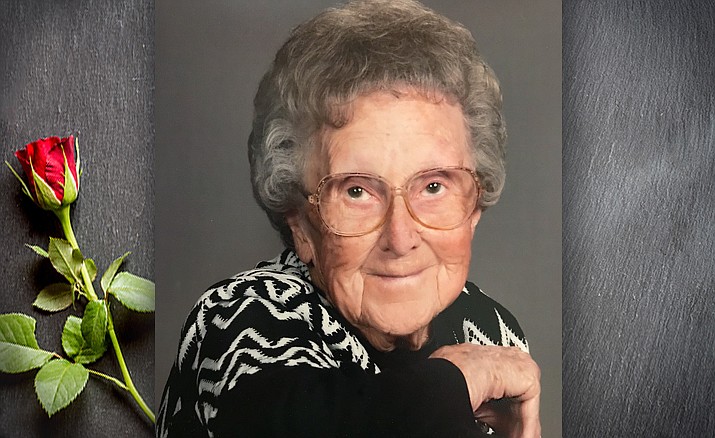 Margaret Opal (West) Pauley of Prescott, Arizona, was greeted by her Heavenly Father at the young age of 99, on the morning of Oct. 12, 2021, with her family and friends surrounding her. Margaret was born on June 18, 1922, to Virginia (Peters) and Nathaniel West in Wolfpit, Kentucky, to humble surroundings as her father was a coal miner. She grew up in West Virginia and was an excellent student. Although she only finished 11th grade, she was a wonder in math, able to calculate a bill and figure tax in her head.

Margaret met the love of her life, John Pauley, while she was in middle school and he was a high school student. John had his eye on someone else and recruited Margaret to pass notes for him to the “other girl.” Somewhere in the relaying of messages, love bloomed for John and Margaret and they eloped. The newlyweds arrived in Prescott by train on Oct. 4, 1940, at the Depot on North Cortez Street. Her first Sunday in Prescott, Margaret attended First Baptist Church in the old stone building.

John and Margaret opened “Pauley’s Grocery” by the old Studio Theater and Cappy’s Shoe Shine on South Cortez Street. Almost one year to the very date of their arrival in Prescott, their first daughter, Patty, was born. Too poor to afford a crib, the couple placed Patty in an apple crate from the grocery store. Their second daughter, Peggy, joined the growing family in October 1944, this time bartering a crib for the newborn for groceries. Their hard work paid off and they opened Prescott’s first modern grocery store on April 4, 1946, up a block on South Cortez Street where the City Legal Department is currently located.

The young couple had a vision for the development of Prescott and by the early ’50s had launched the most successful real estate business in the tri-city area; Pauley and McDonald Realtors. Cherished friends like Charlie and Ruth Anne McDonald, John and Helen Taylor, J.P. and Lee Collier, O.R. Moore, and Frank Mayotte became partners in this prosperous and trusted real estate business. John Pauley II completed the family in June 1951.

Margaret’s life was dedicated to serving the Lord and His followers. She had a heart for the youth of the church and led the King’s Daughters, Pioneer Girls, the Junior Department, and after school AWANA. She was the program director for summer camps and winter retreats for junior girls at the Baptist Estates (now Prescott Pines). Willing to wear a costume of any kind or be thrown into the frigid pool, it is hard to say who had more fun and energy at camp; she or the girls!

Her panache for details found her serving as church clerk; many of the membership records are in her own handwriting. She served on the Board of Directors for Southwestern Bible College (now known as Arizona Christian University) from 1967 to 1997. Her vision for affordable, Christian education paved the way for the growth the university has experienced. She was a dedicated member of the Gideons International Bible Society, Christian Women’s Club, and Alta Vista Garden Club. Margaret was recruited by Pastor H. Allan Smythe to be the social director for First Baptist Church, paying a whopping dollar a year! How could she refuse! She prepared church suppers, hosted dinner theater, sent brides down the aisle, organized wedding receptions, and prepared delicious bereavement dinners. She liked to have the kitchen full of helpers; laughing, cooking, and serving, all while taking direct orders from her! Don’t even think about taking a church table cloth from the closet without asking!

However, her greatest passion in ministry was Vacation Bible School. For decades, Margaret directed VBS hosting hundreds of rowdy children with the daily opening ceremony of weighing rolls of pennies for the offering. Thousands of dollars were raised a penny at a time for missionaries all over the world. The bank loved seeing her come with a parade of children pulling a wagon full of rolled pennies.

Margaret’s family took the Fifth Commandment of “Honor Your Father and Mother” found in Exodus 20:12 very seriously, loving and serving her till the very end of her life here on Earth. In reciprocation, she was extremely devoted to her family: daughter, Patty Rummage and her children, Amanda (Garry) Chartier and Thad (Kendi) Rummage, daughter, Peggy Pauley, and son, John II (Cheryl) Pauley and their children, Brook and John III (Sarah) Pauley. Great-grandchildren include: Garrett Lee, J.T., Abigail, Jadon, and Jed with the anticipated soon arrival of baby Pauley to John III and Sarah. Margaret was joyfully greeted in Heaven by many saints including her sisters, Murl and Edna and her beloved husband, John.

Margaret’s vision of family extended beyond blood relations. She welcomed into the family Ben and Alleyama Joseph and their children, Jason and Asha, Mark and Shelly Baker and their children, Taylor and Ali, and Mark Priola and his children, Kimberly Grace and Dominic along with countless others.

Margaret was present as big as life within each person surrounding her. She impacted each of us in different ways and caused change in the course of our lives. God helps us cross the divide from loss to comfort with a better understanding of His works and our faith in Him. Margaret walked her beliefs everyday of her life and carried out her ministry of faith.

Margaret’s Memorial Service will be held on Saturday, Oct. 23, 2021, at 4 p.m., at the Solid Rock Christian Fellowship (formerly First Baptist Church Downtown), 148 S. Marina St. Please bring a roll of pennies to the service, paying tribute to the beloved Vacation Bible School days! A savory bereavement dinner will be served immediately after the service, all are welcome. Donations in her memory may be made to the 5 & 2 Soup Kitchen at Solid Rock Christian Fellowship, 148 S. Marina St., Prescott, AZ 86303 or Bethel Baptist Church of Prescott Valley / Vacation Bible School, 6901 E. Horizon Lane, Prescott Valley, AZ 86314.