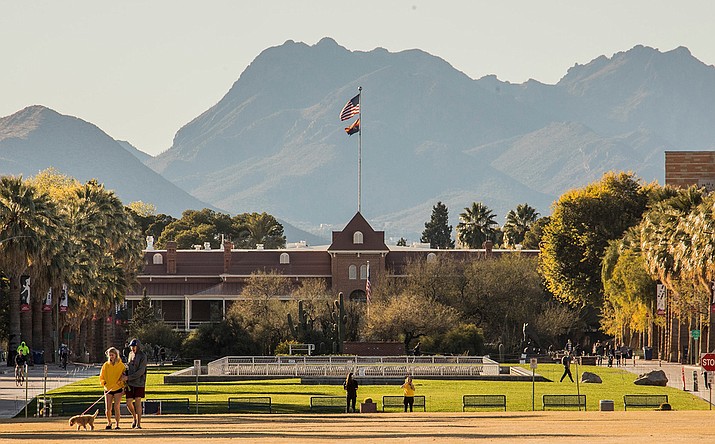 PHOENIX — Arizona's three state universities will comply with a federal mandates for government contractors and require their employees to be fully vaccinated for COVID-19 by Dec. 8 unless granted exemptions, officials announced Friday.

The requirement by the University of Arizona, Arizona State University and Northern Arizona University includes undergraduate and graduate students who are also university employees, the state Board of Regents said in a statement.

The statement cited President Joe Biden's executive order regarding on compliance with federal COVID-19 workplace guidance and said the universities have "hundreds of millions of dollars in federal contracts, funding critical research, employment and educational efforts."

"We respect individual opinions regarding the vaccine and will include disability (including medical) and religious accommodations consistent with federal rules," the statement added.

A regents spokeswoman did not immediately respond when asked what would happen to an employee not complying with the mandate.

The University of Arizona "already has received amended federal contracts that include this requirement," President Robert Robbins said in statement. "While we respect individual opinions regarding the vaccine, we will continue with these mission-critical endeavors and will be complying with this new requirement."

LAKE HAVASU CITY (AP) — Authorities have identified one of two people who drowned in the Colorado River as a 75-year-old California man.

The sheriff's office in Mohave County, Arizona, said Friday that divers are continuing their search for the body of a woman who also drowned Thursday.

Authorities say both victims were traveling in their boat when the woman fell in the river while trying to retrieve a personal item. James Weaver of Valley Center, California, then entered the water to help but lost consciousness.

The woman fell below the surface a short time later.

Weaver was taken to the shore. But lifesaving efforts by passing boaters and first responders were unsuccessful.

MESA (AP) — After being closed for over three years, the oldest Arizona temple of The Church of Jesus Christ of Latter-day Saints is opening for five weeks of rarely allowed public visitation in advance of its rededication on Dec. 12.

The Mesa Arizona Temple was shuttered in May 2018 for a major renovation that included new roofing and drainage, windows, furniture and finishes, additional trees and landscaping, along with construction of a new visitors center.

The visitation period that began Saturday will run through Nov. 20 with tours offered daily except Sundays. Church officials said they anticipate strong interest in the tours and they recommended making advance reservations.

After the public visitation period leading up to the rededication, access to the sacred temple then will be limited to church members.

In what is widely known as the Mormon church, temples are different from chapels or meetinghouses, where Mormons attend Sunday services and where anyone is welcome to worship. Temples are where special ceremonies, such as marriages, are held.

It is only the third time in its nearly 100-year history that the Mesa temple has been open to the public, KNXV-TV reported.

Originally known as the Arizona Temple, the Mesa temple was originally dedicated in 1927 and it was rededicated in 1975 following expansion and remodeling.

Some of the recent renovations, including neoclassical area rugs and furniture, checkerboard floor patterns and new door hardware, are meant to recreate the temple as it was when it first opened in the 1920s, according to reports.

The church established deep roots in Arizona in the 19th century when thousands of Mormon settlers made difficult treks from Utah across hundreds of miles of desert and the Colorado River.

The church's other temples in Arizona are located in Gilbert, Phoenix, Tucson, Snowflake and near Thatcher.

PHOENIX (AP) — Ron Watkins, a prolific promoter of conspiracies about the 2020 election who is closely tied to the QAnon movement, says he is running for Congress as a Republican in Arizona.

Watkins has a large and fervent following among Donald Trump supporters who believe the former president's false claims that he lost the election because of fraud. His candidacy could shake up the race in one of the GOP's top congressional pickup targets.

Watkins filed papers with the Arizona secretary of state this week and later posted a video on Telegram repeating his claim that the election was stolen from Trump.

It's not clear whether Watkins currently lives in Arizona or its 1st Congressional District. In the days before his announcement, he posted photos of himself with Republicans Kari Lake, a former television anchor running for governor with Trump's endorsement, and Tom Horne, a former attorney general and state schools superintendent running again to lead the Education Department. He endorsed both candidates.

Watkins did not answer the phone and did not respond to text messages and emails sent to the contact information on the statement of interest he filed with Arizona election officials.

Watkins was the longtime administrator of 8kun and its predecessor, 8chan, online message boards that were known for misinformation and hate speech, and which played a crucial role in seeding the QAnon conspiracy movement. He has said he gave up the role last year.

Arizona's 1st District, one spanning vast swaths of rural northern and eastern portions of the state, is a top pickup target for Republicans. The boundaries are still being drawn by the state's independent redistricting commission, but it's widely believed the district will be one of the state's most competitive.