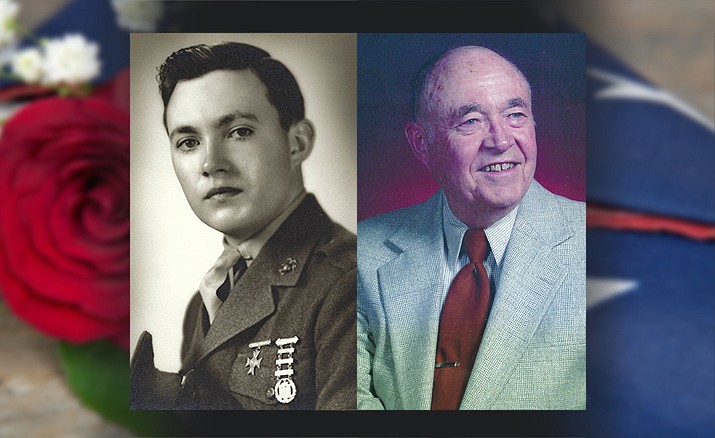 Thomas Marion Robbins, 97, of Prescott, Arizona, entered into eternal rest on September 28, 2021. Tom was born in Prescott, the son of Robert Monroe Robbins and Virginia “Virgie” (Hite) Robbins. Tom was a 2nd generation born and raised in Prescott which has led to now 5 generations of his family being born Prescottonians.

Tommy, as he was called by friends, attended Lincoln School, Prescott Junior High (originally) on East Gurley), and graduated from Prescott High School (where Mile High Middle School is now) in 1942. He played on the Prescott High School tennis team and the ski team called SKImos. The SKImos would practice on Mingus Mountain and out White Spar Road. Of course, there were no ski lifts, so the team had to ski down and walk back up to get ready for their competitions up in Flagstaff at the Snow Bowl.

Months after graduating from high school, Tommy signed up for the United States Marine Corps. He was a USMC Sergeant at discharge and spent most of his time during WWII in the South Pacific in Guadalcanal, Okinawa, Guam, and Tientsin, China. After his discharge from the Marine Corps, he started college at Arizona State College earning a teaching degree in 1950, followed by a Master’s in School Administration in 1955 (by then Arizona State University).

Tommy met the love of his life, Mary Jane McCaffrey, also of Prescott, on the 4th of July at the Green Frog on Whiskey Row. They were married in 1948 at the old Sacred Heart Church on Marina Street. They celebrated 70 wonderful years together and raised four children in Prescott.

After graduating from ASU, Tom returned to Prescott and started his first teaching job as a 4th grade teacher at Washington Elementary School, which began his 32 year career in Prescott Unified Schools. He went on to accept a 6th grade teaching position at Dexter Elementary and eventually became the Principal of the school. Tom was selected to be the first principal of the brand new Taylor Hicks Elementary School. After Taylor Hicks, Tom finished his career back at Dexter as the principal and Director of Elementary Schools for PUSD. In his honor, the Dexter Library was named after him.

Because of his teaching job being only 9 months, Tom always had summer jobs. They included such jobs as being a Fireman on the railroad, working for Arizona Public Service as a lineman cutting poles, and 6 summers with the Forest Service as a firefighter and patrolman. Tom also spent a short time working at the Clarkdale Smelter behind the ore crushers and was a Deputy Sheriff under his uncle, Sheriff Orville Bozarth.

Tom worked at the Plaza Bowl bowling alley for years at night to add to his teaching salary and practice one of his favorite sports. He was a great bowler winning many tournaments and went to the National Bowling Tournament 50 years in a row and received his 50 year National Pin.

Tommy loved to fly and got his private pilot’s license. He was a member of the local Civil Air Patrol after he retired. He loved following and supporting his kids and grandkids in all their sports and activities. He was a huge ASU and Arizona sports team fan. Never missing a game on TV or radio! He loved old cars, had an infectious laugh, and once convinced his grandchildren his truck could fly.

Tom was a loving and wonderful husband, father, grandfather (Pappy), uncle and friend. He had many lifelong childhood friends growing up in Prescott.

The family would like to give special thanks to his caregivers, Mary Ellen Robbins, Jessie Huston and Kimberly Adkins for their unconditional love and care they gave to Tom. Also, a special thanks to the amazing team of Maggie’s Hospice. Can’t say enough about how wonderful you all are!

There will be a private family memorial service at the Prescott National Cemetery with full military honors. In lieu of flowers, the family is asking that donations be made to Maggie’s Hospice, 306 N. Virginia Street, Prescott, AZ 86301