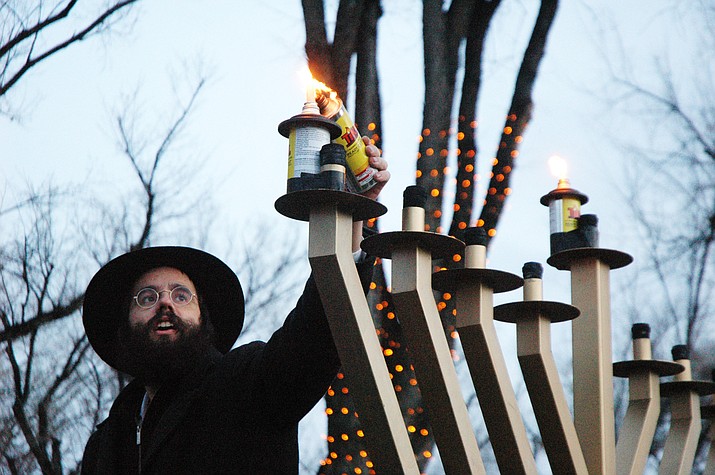 Rabbi Elie Filler of Chabad of Prescott lights a giant menorah on the courthouse plaza in celebration of the first night of Hanukkah. Chabad of Prescott will have a 2021 public menorah lighting on Sunday, Nov. 28. (Courier file photo)

• The Chanykah Celebration, including the public Menorah lighting, will be Sunday, Nov. 28, on the courthouse plaza (Montezuma side), according to a news release.

The event, which will be socially distant, will include special swag, latkes, donuts and more.

• Kids Build & Bake is being presented by Chabad of Prescott, inviting children in the community to this free event, according to a news release.

The event is Monday, Nov. 29, at 5 p.m. and will include building your own wooden Menorah, bake Chanukah treats, donuts and more.

• On the fourth night of Chanukah, Dec. 1 at 6 p.m., Chabad of Prescott is presenting the Chanukah Drive-In event at the Prescott Gateway Mall, according to a news release.

There will be a large (massive) video presentation, latkes and treats, Chanukah swag, games and music.

Jews in the quad-city area and around the world will begin celebrating Chanukah, the Festival of Lights, at sundown on Nov. 28, a news release from Temple B’rith Shalom, Prescott states.

Chanukah is an eight-day observance that commemorates the successful revolt, in 164 BCE, of the Maccabees and their allies against the oppression of Antiochus IV, a Hellenistic Greek tyrant of the Seleucid Empire who massacred Jews and attempted to wipe out Jewish practices such as keeping kosher, circumcising Jewish boys and studying Torah. The Holy Temple in Jerusalem was desecrated under Antiochus.

A tradition holds that, when the victorious Maccabees entered the Holy Temple, they couldn’t find any pure olive oil to kindle the menorah, a sacred candelabrum used in the Temple in Jerusalem. Their search turned up a small jar that contained only enough oil to burn for one day. Instead it burned for eight days, providing the light and the hope that they needed to rebuild and rededicate their holy space. The Jews considered it a great miracle.

To commemorate the miracle, Jews light candles in their menorahs for each of the eight days that the jar of oil burned. Chanukah means to dedicate, and helps Jews to recall the moment when the Maccabees rededicated the Holy Temple.

Chanukah is a special, joyous, time for Jewish children. Many families give children a small gift for each night of Chanukah. They also eat special foods, such as potato latkes (pancakes) and sufganiot — jelly doughnuts — because they are made with oil, reminding Jews of the oil that burned for eight days.

This year, Chanukah begins on the evening of Sunday, Nov. 28. Candles are added to menorahs for each night of the eight-day holiday. For more information, contact Temple B’rith Shalom at 928-708-0018.

Baha’is of the quad-city area of Prescott, Prescott Valley, Chino Valley and Dewey-Humboldt are preparing to mark on Saturday, Nov. 27, the 100th anniversary of the ascension of ‘Abdu’l-Bahá, the son of Bahá’u’lláh, founder of the Bahá’í Faith.

Before Bahá’u’lláh, the founder of the Bahá’í Faith, died in 1892, He designated His son, ‘Abdu’l-Bahá, to become the interpreter of His teachings and leader of the Faith. ‘Abdu’l-Bahá’s life of service and dedication to His Father’s teachings of loving kindness and unity, is an inspiration to the millions of people worldwide who are honoring Him now, 100 years after His death.

Gladys Stewart of Prescott Valley says that “Abdu’l-Baha is our Guide, Comforter, and Protector and He spreads His wings over us all! He is my Perfect Exemplar.”

In commemorating the centenary of His passing, Baha’is of the United States will be remembering His travels through America in 1912. He traveled from coast to coast across America with an inspiring message of America’s spiritual destiny: to lead the way toward world peace, advance women’s rights, abolish racism, recognize the unity of religions, and the harmony of science and religion, and moderate extremes of wealth and poverty.

Adorned with flowing robes and a full white beard, this “Prophet of Peace” traveled to some 50 U.S. and Canadian cities, giving more than 140 public talks with a cumulative audience of about 93,000 people — from leaders of government and industry to servants, the poor and the homeless. He was acclaimed in hundreds of newspaper articles that trumpeted the arrival of the new religion’s leader and His uplifting message for mankind. He also met prominent Americans such as Alexander Graham Bell, Admiral Peary, Jane Addams, W.E.B. DuBois, Kahlil Gibran and Phoebe Hearst.

In His addresses, Abdu’l-Baha warned of impending war, decried outmoded prejudices and hatreds, and outlined America’s potential to lead the way toward a just and peaceful world. To achieve this destiny, He called for America to advance spiritually as well as materially. His Prayer for America expressed a galvanizing vision of our spiritual destiny.

John Lambert of Prescott said, “Abdu’l-Baha’s life has been my inspiration for how to put the Baha’i teachings into practice. I plan on saying prayers to commemorate the centenary of His Ascension at 1 a.m. (the hour of His passing) on Saturday the 27th.”