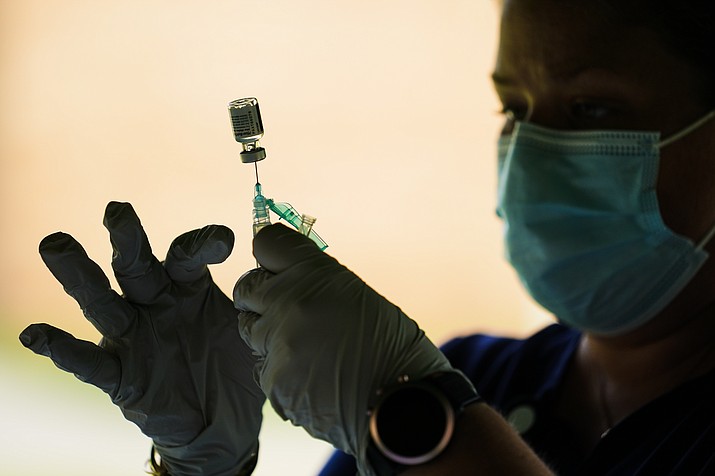 A syringe is prepared with the Pfizer COVID-19 vaccine at a clinic at the Reading Area Community College in Reading, Pa., on Sept. 14, 2021. U.S. regulators have opened up COVID-19 booster shots to all and more adults, Friday, Nov. 19, letting them choose another dose of either the Pfizer or Moderna vaccine. (Matt Rourke/AP, File)

PHOENIX (AP) — Arizona on Tuesday reported over 3,000 additional confirmed COVID-19 cases and 120 more deaths amid growing concern about the pandemic's current surge and its impact on the state's hospital system.

Yavapai County reported 93 new cases on Tuesday for a total of 31,654 deaths since the pandemic began. The 10 new deaths reported Tuesday raised the total to 777.

Virus-related hospitalizations continue to climb in Arizona, with 2,551 COVID-19 patients occupying inpatient rooms as of Monday. That's about half the number of virus hospitalizations during the peak of last winter's surge, but currently there is little available capacity statewide because many hospitals are also caring for large numbers of non-COVID patients.

The additional 3,057 cases and 120 deaths reported Tuesday increased the state's pandemic totals to 1,248,184 cases and 22,062 deaths, according to the state's coronavirus dashboard.

However, the case report was lower than it otherwise would be "due to a reporting issue with one provider," the Department of Health Services said on Twitter.

Arizona's seven-day rolling average of daily new cases in Arizona was just under 4,000 as of Sunday, up from just over 3,000 two weeks earlier, according to Johns Hopkins University data.

Meanwhile, the rolling average of daily deaths rose from 36.3 to 41.3 during the same period. The daily deaths report fluctuates dramatically, often spiking after low numbers early in the week due to weekend reporting delays.