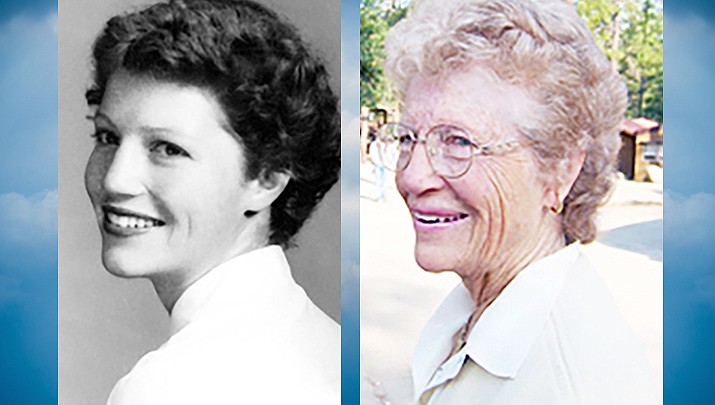 Bebe May, the owner and director emeritus of Friendly Pines Camp, passed away in Scottsdale on May 19, 2021. She was born Beatrice Kathryne Brown in Flagstaff on Nov. 25, 1934.

Her mother, Isabelle Fuller Brown, came from a pioneer ranching family that helped found the town of Pine in the 1870s. Her father, Francis V. “Bud” Brown, was from Yonkers, New York, and was a teacher in the Flagstaff and Phoenix schools. In the 1940s, the Brown family founded Bud Brown’s Barn in north Phoenix and Friendly Pines Camp in Groom Creek, outside Prescott.

Bebe was a 1952 graduate of North Phoenix High School, and graduated from Arizona State College (now ASU) with an education degree in 1956. She also obtained a master’s degree from the American Institute of Foreign Trade. She taught in the Scottsdale and Madison school districts.

In 1963, Bebe married John Kenneth “Jack” May of London, England. He had met the family some 20 years earlier, while training as a Royal Air Force pilot at Falcon Field in Mesa. They initially resided in London, where their son, Christopher was born in 1965. Shortly afterward, they returned to Arizona to take over management of Friendly Pines and, in 1967, their daughter, Rosemary, was born in Prescott.

Jack and Bebe ran Friendly Pines Camp together until his death in 2012. She stepped back from day-to-day management of the camp a few years later, but never completely retired. She was a longtime member of All Saints’ Anglican Church, served on the Yavapai County Planning and Zoning Commission, and was a member of the Republican Women’s Club of Prescott. Apart from her family, her greatest loves were horses, baseball, and world travel.

Bebe is survived by her son and daughter-in-law, Christopher and Barbara May of Scottsdale; daughter, Rosemary Taylor of Scottsdale; granddaughter, Megan May of Prescott; grandsons, Nicholas May and Collin and Brock Taylor, all of Scottsdale; sister, Frances Whetten of Cottonwood; and sister, Margaret Kennedy of Cordes Junction. Her husband, Jack, predeceased her, as did her sister, Teddy, and brother, Tim. She leaves behind a wide circle of friends and innumerable members of the Friendly Pines Camp family who will always hold her memory dear in their hearts.

A Memorial Service will be held at Friendly Pines at a later date, probably in late September. If you wish to donate to a worthy cause in her honor, the family asks that you consider the following: All Saints’ Anglican Church (www.allsaintsprescott.org), Multiple System Atrophy Coalition (www.multiplesystematrophy.org), Chrysalis Shelter (www.noabuse.org), Heifer International (www.heifer.org), Hospice of the Valley (www.hov.org), Habitat for Humanity (www.habitat.org) or Doctors without Borders (www.doctorswithoutborders.org).