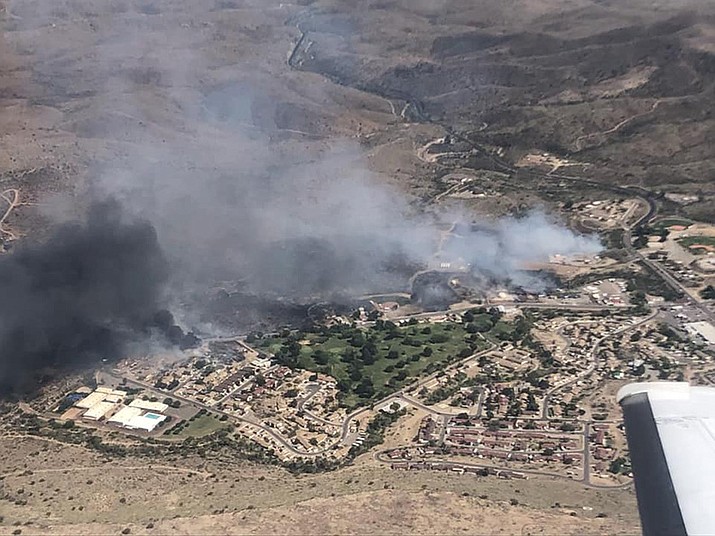 The Spur Fire burns in Bagdad, Arizona, west of Prescott on Thursday afternoon, May 27, 2021. (Arizona Department of Forestry and Fire Management)

At about 8 p.m. on Thursday, Williamson Valley-Bagdad Fire District Deputy Chief Anthony Tunis said he spoke with the incident commander of the fire emergency, who said 13 homes have been lost and an additional 27 have been damaged due to the fire.

At about 7:30 p.m., Yavapai County Sheriff's Department posted on Facebook that the fire has grown to 150 acres but Tunis said the incident commander had told him crews have the fire contained, for the most part.

Around 1 p.m. on Friday, YCSO posted on Facebook that evacuations orders have been lifted for Poplar Court, Maricopa Drive and Laurel Court as the process is a phased reentry and only residents of the listed streets may return at this time.

In the same post, YCSO said fire agencies are recommending properties on these streets that do not have utilities should not be used for habitation until utility service is restored.

The Arizona Department of Forestry and Fire Management announced on Facebook Friday morning that the fire remained at 150 acres through the night and is 25% contained while work to get electricity and water restored is still in progress.

Fire crews late Thursday, May 27, were battling the Spur Fire in Bagdad, which started early Thursday afternoon and prompted nearly the entire town’s population to be evacuated, according the Arizona Department of Forestry and Fire Management, the Yavapai County Sheriff’s Office and the Williamson Valley-Bagdad Fire District.

The Department of Forestry and Fire Management posted on its Facebook page the fire — located in the Holly Court-Poplar Court area of Bagdad — was showing “extremely active behavior” and putting “structures and other values at risk.” This includes some mining infrastructure on the adjacent mine.

Anthony Tunis, deputy chief at the Williamson Valley-Bagdad Fire District, said the initial call of the fire was received at approximately 1:55 p.m. Thursday. As of 5:57 p.m., he said that the last update he received indicated that the fire had grown to 27 acres and 25 structures had been lost.

Yavapai County Sheriff’s Office also responded to the scene to conduct evacuation measures in which a Code Red “GO” message was sent for all those residences east of Lindahl Road and north of Main Street, urging them to evacuate, according to Silent Witness Director Chris Wilson. Ultimately though, Tunis said 1,500 residents, which is nearly the town’s entire population, were evacuated as of 5:57 p.m.

The Bagdad High School gym was serving as an evacuation shelter but Wilson said that has since been changed to the Hassayampa Elementary school at 195 E. Coconino St. in Wickenburg. There, the American Red Cross is helping evacuees with resources and possible accommodations.

Highways 96 and 97 are both closed coming into Bagdad, according to YCSO.

And 911 emergency lines were down for a short time but YCSO announced at 5 p.m. that they were back up and operational again.

Power remains out to the town as lines were de-energized for public safety, according to the Department of Forestry and Fire Management. Phone lines are also down as fire burned through fiber optic cables. 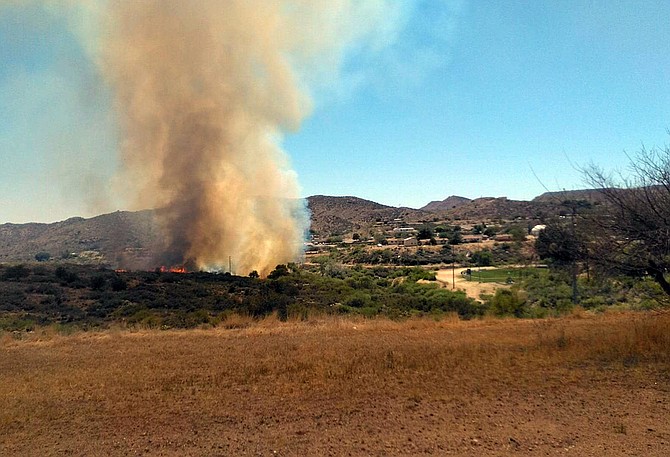 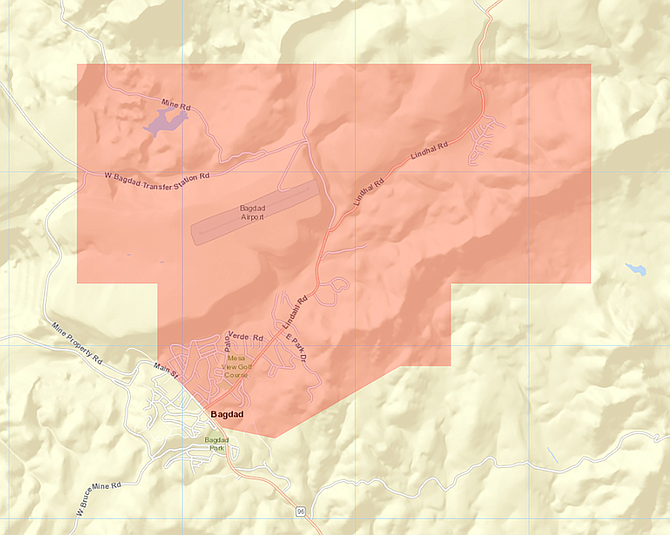 The pink area on this map of Bagdad, Arizona, denotes the affected area of the Spur Fire on Thursday, May 27, 2021. (YCSO)