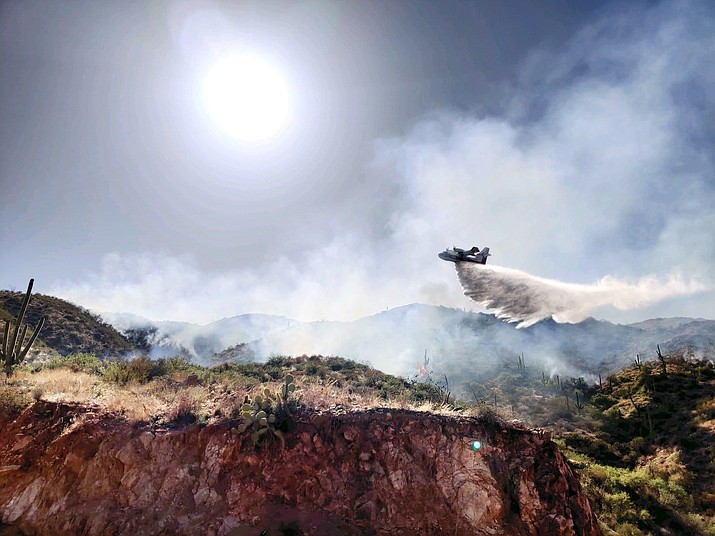 Pictured is the "Super Scooper" — a one-of-a-kind aircraft — dropping a load of water on the Tussock Fire burning southwest of Crown King, Arizona. The plane is using water from nearby Lake Pleasant. (Southwest Area Type 1 Incident Management Team/Courtesy)

Despite a windy day on Sunday with 40 mph gusts, there were no new starts in the initial attack area of the Tussock Fire burning southwest of Crown King.

Fire officials explained that the fire's overall complexity continues to lessen. It is currently 91% contained.

"The Southwest Area Type 1 Incident Management Team #2 will begin to demobilize or reassign personnel and equipment ahead of transitioning the fire to a local incident management organization to complete remaining tasks," the release said. "The transition will take place Tuesday at 6 a.m."

Firefighters will continue to monitor, secure and patrol the fire line. As a majority of firefighters are released throughout the day, engines, hand crews and two helicopters will remain assigned to the fire.

Heavy equipment completed road improvements on Forest Road 362 from Hooper Saddle to Minnehaha on Sunday, May 16. The crews used dozers and graders to level the road and masticators to remove brush along the roadside. This road improvement will allow for better access to future fires. Chippers also completed their assignments around the community of Crown King. Heavy equipment and personnel will be released this afternoon as the team continues to downsize, the release said.

The cause of the fire is still under investigation, but fire officials believe it was caused by humans.

In a separate press release, forest officials announced that effective at 6 a.m. Tuesday, May 18, the Prescott National Forest will lift the Tussock Fire Public Safety Closure.

Full closure details are available on the Tussock Fire Incident website at inciweb.nwcg.gov/incident/7472. You can also see updates on Facebook at Facebook.com/TussockFireInfo.

Fire Restrictions are in effect across Arizona. Information is available online at wildlandfire.az.gov.