Stomach flu may be circulating in Prescott area, health officials warn
COVID-19 is not the only virus 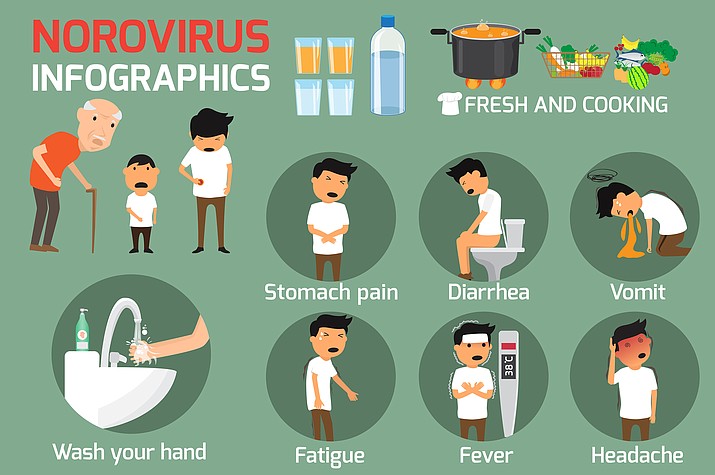 Yavapai County public health officials say they have received numerous calls from residents experiencing a stomach-flu like illness and asking if there was something going around.

The county health department believes the outbreaks being reported are likely norovirus.

Norovirus is a very contagious virus that causes vomiting and diarrhea. According to the Centers for Disease Control and Prevention (CDC), you can get norovirus from having direct contact with an infected person, consuming contaminated food or water, or touching contaminated surfaces and then putting your unwashed hands in your mouth.

YCCHS provided information about what it might be in case someone in your household comes down with what may be norovirus.

“You may hear norovirus called food poisoning, stomach flu or stomach bug,” YCCHS explained. “Noroviruses are the leading cause of foodborne illness — it is not related to the flu, which is caused by the influenza virus.”

First, norovirus is a very contagious virus that causes vomiting and diarrhea. Outbreaks are common and the virus spreads easily and quickly.

If you have norovirus, you’re contagious from the moment your symptoms start until at least three days after recovery.

The common symptoms are:

Protect yourself and others from the norovirus by:

• Stay home when sick and for two days after symptoms stop.

• Avoid preparing food for others when sick for two days after symptoms stop.

• Hand sanitizer does not work against norovirus.

Norovirus symptoms usually last one to three days, and most people recover completely without treatment.

However, for some people, vomiting and diarrhea can lead to severe dehydration and require medical attention.

For this reason it’s important that precautions be taken around the very young, the elderly and people at any age with weakened immune systems because they are at risk for more serious illness from norovirus infection.

“There’s no treatment for norovirus, so you just have to let it run its course,” YCCHS stated. “You don’t usually need to get medical advice unless there’s a risk of a more serious problem.

“To help ease your own or your child’s symptoms drink plenty of fluids to avoid dehydration. Call your doctor’s office if you still have symptoms after three days.”