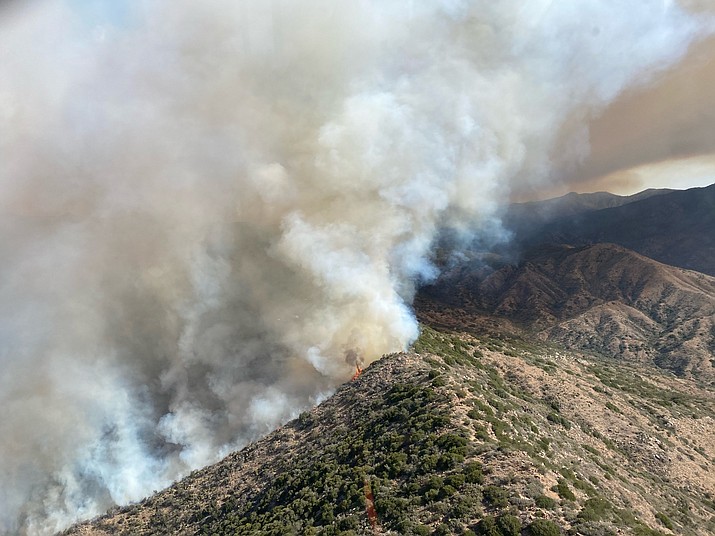 As valley temperatures increase, people are headed to public lands north of Phoenix this weekend. Incident officials are asking that motorists drive slowly and stay out of the fire closure areas, a news release stated.

People can prevent human-caused fires by practicing these safety measures:

• Tighten towing chains to not drag on I-17 or any pavement; the chains can easily spark a fire.

• Pull vehicles over where there is no vegetation; vehicle heat can ignite the drought-stricken grasses.

• OHV operators must stay on trails. Vegetation where they ride can easily ignite.

Today no fire movement or growth is expected despite a second day of hot temperatures, the PNF reported. The forecast shows low humidity and winds gusting to 40 mph, resulting in critical fire conditions, especially on the ridge of Silver Mountain.

Crews are remaining vigilant all around the fire, monitoring, patrolling, and securing the control lines.

The southern fire perimeter has essentially run out of fuels and isolated hot spots are burning themselves out. Up in the northern areas on the Prescott National Forest, smoldering isolated hot spots are in steep and rocky areas that are well interior of control lines. They do not pose a hazard to containment. These hot spots should burn out on their own within the next two to three days.

Officials are preparing for potential dry lightning, and firefighters are available for initial attack of new fire starts.

All BLM and Prescott National Forest lands, roads, and trails in the area of the Tussock Fire are closed. Full closure details are available on the Tussock Fire Inciweb https://inciweb.nwcg.gov/incident/7472/.

All evacuations for the Tussock Fire were lifted at 6 p.m. Thursday, May 13, for the area of Fort Misery, Minihaha, and Horse Thief Basin, the Yavapai County Sheriff's Office reported.

However, all residents in Crown King, Fort Misery, Minihaha and Horse Thief Basin should remain at "Ready," the YCSO reported in a news release. "Stay aware of the latest news and information from local media, your local fire department and public safety officials."

Winds are forecast to pick up, potentially to a Red Flag status and could challenge firefighters working on the north ridgeline. "This area is too dangerous to insert crews due to steep terrain," the Southwest Area Type 1 Incident Management Team stated in an updated news release Friday morning. "The fire has parked itself there and is being monitored by air. This area has the most potential for fire spread. Heavy equipment continues to build and improve the contingency line and open access if needed."

Incident officials held a virtual Community Meeting on Facebook Thursday night, providing in-depth fire behavior, weather, and operations information. The briefing was recorded and can be seen anytime at https://www.facebook.com/TussockFireInfo.

Crown King remains closed to all non-residents because of the wildland fire, which was human caused and began Saturday, May 8, according to inciweb.nwcg.gov.

The fire, which - as of Friday evening - is 74% contained, has burned 5,546 acres. The firefighting effort includes 419 wildland crew members, with estimated full containment of May 20.

The YCSO stated that all prior road closures remain in effect.

The Prescott National Forest lands, roads, and trails south of NFSR94 (along NFSR82A to the junction of NFSR52), and south to the junction of CR177 east are closed, including Senator Highway (FR 52) between Hooper Saddle (FR 362) and Crown King (FR 259).

Additionally, the area of Cow Creek Road, that leads to FR 711 near Lake Pleasant is closed.

Sheriff David Rhodes expressed his thanks to the citizens of Horse Thief Basin, Minihaha, Fort Misery and Crown King for their patience and cooperation through this event.

"It is unfortunate that too often, it seems these communities are impacted by fire events. The citizens and business owners of Crown King have taken great care of our first responders both firefighters, and law enforcement, and it is greatly appreciated.

"Thanks too for the tireless efforts of the Sheriff’s Office volunteers, Sheriff’s Office employees, and our partners in fire service, the Southwest Area Type 1 Incident Management Team, the Bureau of Land Management, the United States Forest Service, and Yavapai County Emergency Management."