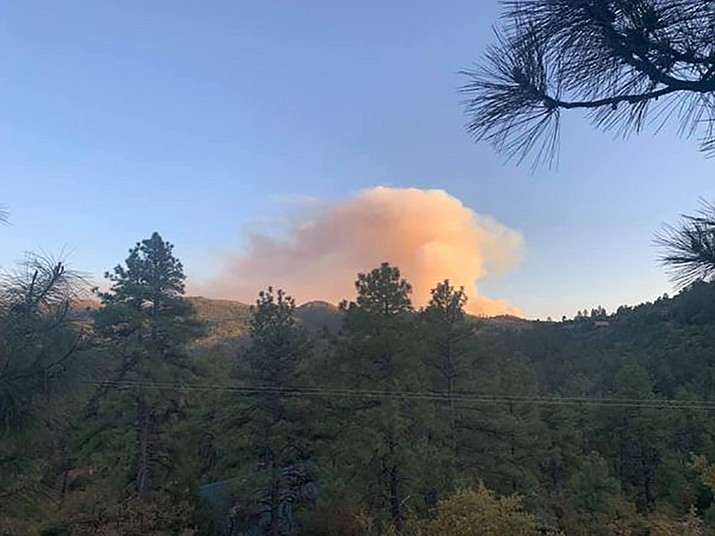 Smoke from the Tussock Fire burning southwest of Crown King can be seen from the quad-city area. (Crown King Fire Department/Courtesy)

UPDATE: A mandatory evacuation has been issued for residents and anyone located in the Horse Thief, Minihaha and Fort Misery areas.

"There is significant danger to you, gather necessary items and go," stated a news release from the Yavapai County Sheriff's Office Sunday afternoon.

All residents located in Crown King should be prepared to evacuate the area if needed, fire authorities warned.

Stay aware of the latest news and information from your local media, your local fire department and public safety officials.

A wildfire burning southwest of Crown King is causing some roads in the area to be closed.

The Yavapai County Sheriff’s office is working in conjunction with the Bureau of Land Management and the U.S. Forest Service on the response to the Tussock Fire, which is burning to the southwest of Crown King.

"We are announcing the closure of some forest roads in the area of Old Senator highway at the junctions of FR 362 and FR 192 near Crown King," officials announced Sunday in a news release from Yavapai County Sheriff's Office. "Additionally, the area of Cow Tank road, that leads to FR 711 near Lake Pleasant has been closed to the public."

As of Sunday morning, the fire is estimated at 800 acres.

The Bureau of Land Management (BLM) is currently managing this fire with a Type 3 command team.

On Sunday, BLM has been transitioning to a Type 2 command team and will be working on ordering air assets to combat the fire in the remote rugged landscape southwest of Crown King.

Fire crews worked all night to gain control of the fire, the release said.

The cause of the fire is under investigation. Travelers are being asked to stay clear of the area as fire personnel work to contain the fire.