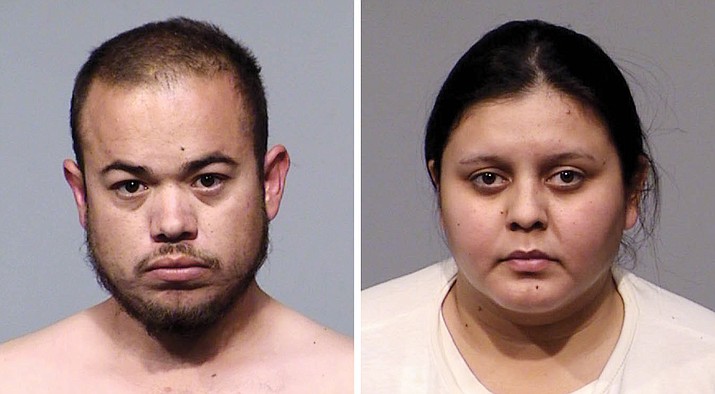 Roberto Guerrero, 27, of Tucson, left, was the driver, while 24-year-old Ana Razo-Villela, of Tucson, were charged with trafficking 52,000 fentanyl pills after a traffic stop on Interstate 17 led to the bust. (YCSO/Courtesy)

With their three children in tow, a father and mother were arrested this past weekend after attempting to smuggle more than 52,000 fentanyl pills inside a hidden compartment of a child car seat, according to the Yavapai County Sheriff’s Office on Monday night.

On Sunday, March 28, a YCSO deputy conducted a traffic enforcement stop along Interstate 17 near Cordes Junction after the vehicle made an unsafe lane change.

The deputy “noticed inconsistencies during the traffic stop,” according to a YCSO news release, and decided to run his K-9 around the vehicle.

“The dog alerted to drugs inside the car, so a search of the vehicle was conducted,” YCSO spokesperson Scott Reed said in a statement.

Inside, the deputy located a child car seat and discovered a hidden compartment with more than 52,000 fentanyl pills inside, which is worth an estimated $1 million in street value.

Roberto Guerrero, 27, of Tucson, was the driver, while 24-year-old Ana Razo-Villela, of Tucson, was a passenger along with their three children, all of whom were under the age of 6.

“I wish I could say I was shocked that parents of three young and innocent children would use a car seat to conceal such dangerous drugs,” YCSO Sheriff David Rhodes said in a statement. “But this is the sad reality of our world today. People try to get creative when hiding their criminal activity, but they need to know that they can’t hide anything from us.”

Rhodes said he’s grateful for the work the K-9 deputy did on the stop and getting the drugs off the street.

“His thoroughness not only saved the lives of those who suffer from drug addiction, but his actions helped rescue three very young children from this dangerous environment,” Rhodes said.

Both suspects were arrested and charged with transportation of dangerous drugs and child endangerment.

All three children are now in DCS custody, according to YCSO.

No other information was available.

Watch for an update on this case online at dCourier.com.