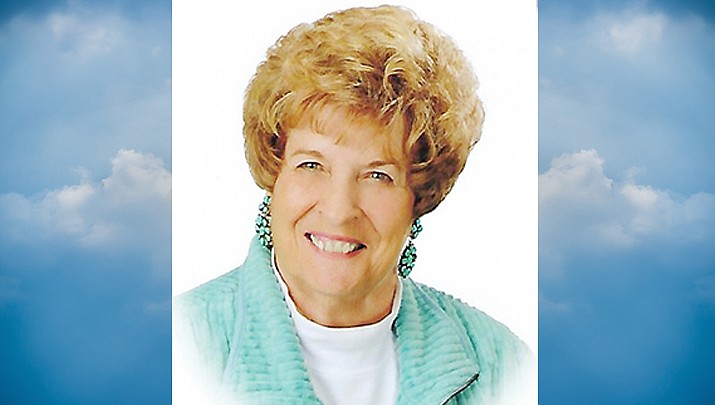 In 1950, she moved to Phoenix, Arizona, with Mom and Stepfather, Perry Bickel. She attended West Phoenix High School (’54) where she was crowned Salad Bowl (Fiesta Bowl) Queen and went on to become the Glendale Melon Queen and Miss Congeniality in the Miss Arizona Pageant.

While working as the first female Escrow Officer in Arizona she met her forever love, Tommy Meredith. Joan was also chairperson of the Brophy College Prep Charity auction and chairperson for the Brophy Ball dance.

She married Tommy Meredith on July 1, 1961, they were looking forward to celebrating their 60th anniversary this year. They had two children, son, Mark and daughter, Tama; three grandchildren, Brianna Pafford, Michael Jacobs and Landon Meredith. The last words she spoke to her husband were: “We gave it a good go, didn’t we?”

They moved to Prescott 24 years ago where she joined her husband at Tommy Meredith Realty as a licensed Arizona Real Estate salesperson, eventually purchasing Jersey Lilly Saloon on Whiskey Row. For 15 years they worked to make Jersey Lilly one of the most recognized drinking establishments for gentlemen and ladies. As the Courthouse Lighting for Arizona’s “Christmas City” was wavering, Joan and Tommy created “The Friends of Jersey Lilly” as a fundraising effort to ensure that the annual courthouse lighting would continue. Joan continued working the fundraiser, raising tens of thousands of dollars each year.

Aside from her family, Joan’s biggest love in life was their summer home in San Diego, California. Her passion for decorating and celebrating for all of the holidays touched each and every person who visited the bar. Her infamous Halloween party, hosted at their residence, was attended by hundreds over the years to include dignitaries from every level of office within Prescott and Yavapai County.

From the moment she arrived in Prescott, there wasn’t a single person who didn’t fall in love with her smile, laugh and boundless heart. Many never met her, but had a love for her based solely on how someone described her. Joan is irreplaceable and will be dearly missed.

A Memorial Service will be held Friday, April 9, 2021, at 11 a.m., at Sacred Heart Church, 150 Fleury St., Prescott. A Celebration of life will follow at 1 p.m., at Jersey Lilly Saloon, 116 S. Montezuma, Prescott. In lieu of flowers, donations can be made to the “Friends of Jersey Lilly” (courthouse lighting fundraiser) which Tommy and Joan founded.