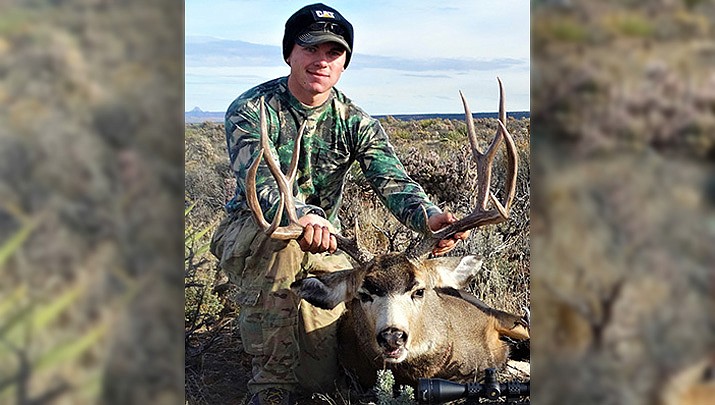 Tye James Seets, TyeTye to his cousins and Thumper to his teammates, was born on June 20, 1994, in Prescott, Arizona, in the same hospital as his mom, uncle, and grandma before him. He was on loan to us from his Heavenly Father, who called him home on March 17, 2021.

Tye was an avid baseball player, starting tee ball in Prescott Little League at the age of 4. He played all the way through high school and was an OG Prescott Rebel. He proudly wore his Uncle Nate’s jersey number: 14. He was an outstanding left-handed pitcher and first baseman and dreamed of one day playing for his beloved LA Dodgers.

He hunted and fished his entire life. Along with baseball, they were his passions. He loved nothing more than being in the woods, than watching a sunset from a mountaintop. No one could keep up with him when he took off on a hike. He studied ballistics for fun and loved to shoot, especially long-range.

Tye graduated from Prescott High School in 2012. He was the first of the 3rd generation of Seets to graduate from PHS and that history was important to him. Right after graduation, Tye and his best friend, Mike, joined the Army as Infantrymen. Tye proudly followed in the Infantry footsteps of both of his great-grandpas. Tye and Mike vowed to be 101st Airborne, and although it seemed unlikely, God kept them together and after OSUT at Fort Benning, Georgia, they went to Fort Campbell, Kentucky – home of the elite 101st Airborne. Tye was a scout sniper in the 2nd BCT, 1st Battalion, the 1-five-oh-deuce, First Strike, the Wardogs. He loved it. Tye deployed to Afghanistan in support of Operation Enduring Freedom in February 2014. While deployed, Tye found another passion: bodybuilding. When Tye came home from the Army, he followed another dream, this time following in the footsteps of his uncles, JW and Nate; he became a firefighter at Prescott Fire Department in 2017. He was blessed to be able to work in the same department as Nate, and sometimes even on the same crew.

Tye loved God, his family, and his country. His family was his biggest joy, as he was theirs. He was a husband that loved his wife with every ounce of himself and amazing Dad who was worshipped by his kids. He was his parents’ world, his brother’s hero, a fun uncle, an adored grandson, beloved nephew, idolized cousin, and a best friend. He was a rock-solid man of his word. He had an unparalleled work ethic and a moral compass that pointed true North. He didn’t have an ounce of quit in him. He was proud to be a small-town country boy, proud of his deep roots. He was a prankster with a great sense of humor. He was larger than life and touched everyone who knew him, leaving indelible marks on their hearts. While we are completely devastated at his loss, we rejoice in the fact that Tye was, above all, a man of God. He loved his Lord and rests with Him now, until we join him there.

Tye’s family would like to encourage anyone suffering from PTSD to PLEASE reach out and get help. There is no shame in it. Your loved ones need you; do it for them if nothing else.

Services will be on Saturday, March 27, 2021, at 1000 hours at the Heights Church, 2121 E. Larry Caldwell Drive in Prescott, with a reception and storytelling to follow at Watson Lake. Tye’s favorite color was Dodger blue. Please feel free to wear it in his honor.

In lieu of flowers, the family requests donations to Prescott Firefighter’s Charities (www.prescottffcharities.org), of which Tye was the president; or to the Mighty Oaks Foundation (www.mightyoaksprograms.org), an organization for veterans suffering from PTSD. #stopsoldiersuicide #onemorerepforTye #family #14 #LADodgers #baseball.